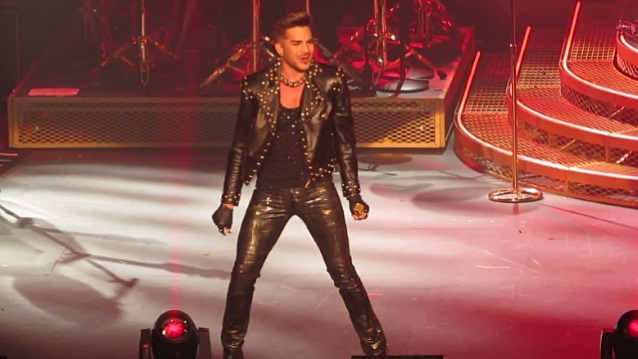 QUEEN has returned to North America for a 24-date arena tour with "American Idol" finalist Adam Lambert once again fronting the band.

Fan-filmed video footage of the tour's second Las Vegas concert, which took place Sunday night (July 6) at The Joint at the Hard Rock, can be seen below.

QUEEN members Brian May and Roger Taylor recently admitted that their current collaboration with Lambert is a better fit than their previous involvement with legendary rock singer Paul Rodgers.

In 2008, May and Taylor, who had been touring with Rodgers as QUEEN + PAUL RODGERS, released the chart bomb, "The Cosmos Rocks", before calling it a day as a trio and a recording entity — despite a string of globally sold-out concerts.

"Paul has one of the greatest rock voices but it's more blues- and soul-orientated I would have thought," Taylor told the Toronto Sun. "I would say, with all due respect to Paul, that Adam is more suited to a lot of our material and whereas we had great tours with Paul, I think Adam is more naturally at home with us." May concurred and added that Lambert's remarkable range and flamboyant stage presence are much more in line with those of QUEEN's original singer, Freddie Mercury. "Yeah, I think the styles match more closely in a sense," May said. "But we had a great time with Paul, no doubt about it, and it kind of stretched it to a new place and, I think, a thoroughly good experience. But Adam is really… Like us, he has many, many colors, so we can explore some of those strange excursions that QUEEN likes to."

"It's surreal," Lambert told the Toronto Sun about performing with QUEEN. "Having auditioned with 'Bohemian Rhapsody' on 'American Idol', and this weird full-circle gorgeous dream come true. When we did our first [tour] run, like giving a full set, it was definitely was intimidating. The idea that I would be in front of QUEEN die-hard fans and I was taking on a large chunk of the catalogue and it was a short time to put it together. And we did it and I think it turned out really, really beautifully, and then when the Vegas thing happened [September 2013 appearance at the iHeartRadio Festival], I feel like it really grounded itself a little bit more."