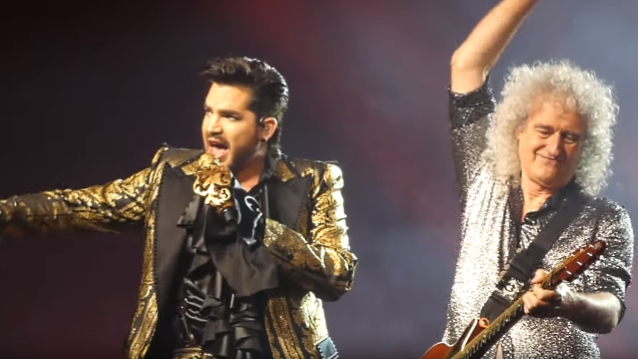 Never known to rest on their laurels, QUEEN on this "Rhapsody" tour unveiled a stage show as experimental and rule-defying as the hit-packed QUEEN back catalog. The band has worked with the creative partners behind the eye-popping "News Of The World" 2017 tour — Ric Lipson of Stufish Entertainment Architects handling set design; Rob Sinclair on lighting design; and Sam Pattinson of Treatment Studio behind the video content — to develop an unmissable show.

Lipson said: "QUEEN + ADAM LAMBERT's 'Rhapsody' tour will, once again for them, expand the parameters of what a live music experience can be. This new show promises to be their most spectacular yet, an innovative and interactive celebration of the continued power of QUEEN's music."

The tour follows an acclaimed run of 10 sold-out shows at the MGM Park Theater, Las Vegas in September 2018. Stop-offs include some of the most history-packed venues in the U.S. and Canada, including The Forum in Los Angeles (the last venue the original lineup played in North America on September 15, 1982) and New York City's Madison Square Garden (the site of past QUEEN glories, including a memorable performance from QUEEN + ADAM LAMBERT on July 17, 2014). It will wrap August 23 at Spectrum Center in Charlotte, North Carolina.

The band's setlist for the Vancouver show was as follows:

The soaring success of "Bohemian Rhapsody" — the Freddie Mercury/QUEEN movie that has become the biggest-grossing music biopic of all time — has proven that the public's love for QUEEN remains as strong as ever.

Since Adam Lambert first shared the stage with QUEEN for the 2009 "American Idol" final, his dynamic performances have reinvigorated the band and delighted fans worldwide. Their first full show together — starting as they meant to go on — thrilled a half-a-million-strong crowd in the Ukraine capital city of Kiev in June 2012. Since then, May and Taylor's musical fireworks have been matched by Lambert's vocal prowess and stage presence, making for an explosive combination. Over 180 gigs later, the partnership has proven a commercial and critical triumph, playing to enraptured full houses in every corner of the world.

Completing the tour lineup are long-term collaborator Spike Edney on keyboards, Neil Fairclough on bass, and Tyler Warren on percussion.