Few punk bands have remained in business for as long as the veteran Canadian trio DAYGLO ABORTIONS has. Since 1979, the band (in one configuration or another) has been offering up no-holds barred punk rock, as well as some truly over-the-top (and unforgettable) album cover artwork/images. And the lads are back with their first studio album in twelve years produced by Rob Shallcross (and ninth studio set overall), "Armageddon Survival Guide", which will be unleashed on March 25 via Unrest Records.

Currently comprised of members Murray Acton a.k.a. the Cretin (guitar and vocals), Willy Jak (bass), and Blind Marc (drums), DAYGLO ABORTIONS' new CD combines their unique blend of catchy punk rock, heavy metal, comical humor, and pissed-off political rhetoric with lyrical content that challenges and disputes the verities of modern life. Classic DAYGLO ABORTIONS style goes hand in hand with feelings that are not so far from bands like ANTISEEN, and their anti-social nihilism attitude. In general, this is the band's best material since their classic records from the '80s.

Standout tunes include "Cockroaches" (which the Cretin explains, "Some consider them an infestation, others label them insane, addicts, victims of society. I think they are people just like us. They are everywhere. In every city. Pushing around shopping carts piled high with their possessions. When the end comes, they will be the survivors. Then they will rule the world.") and "The Dishwasher" ("When Jesus Bonehead left the DAYGLO ABORTIONS, he did it so he could pursue his true calling in life. To follow that inner calling that had been dogging him since childhood. To become a professional dishwasher. Do it for real, in the big league, with the pros, in the kitchen of a skid road diner.").

But the tune that is sounds like it will create quite a stir is "The New Black" ("Looks like America got suckered in one more time. Who saw that coming, and from the black man, and a democrat. Yes but well trained by his banker bosses. And word on the street says his first job out of high school was working for Henry Kissinger. Hey the kid was connected. Looks like the new black is as white as the wall street bankers he let raid the government piggy bank. What are they gonna try next, a woman? Or a bigot? Let's hope for Larry Saunders.").

Lastly, the Cretin offers these final words on "Armageddon Survival Guide": "Just like Armageddon, our new album has been rumored to be coming out for ages now. In fact it says in the Bible, that in the end times, the world will go totally to shit, everyone will be sinning their goddamned asses off, and they will all be listening punk bands like the DAYGLO ABORTIONS, who clearly couldn't give a shit about God or the Devil. Now those aren't the exact words used of course. But that was a long time ago, and what the fuck did they know anyway. Anyway...those days are here, the world has gone to shit, Lady Gaga is rubbing her Satan-worshipping vagina all over the Super Bowl, and the new DAYGLO album is out. It has Mike Jak returning to join with the Cretin in some serious heavy guitar mayhem. The man who is more amazing than god himself, Blind Marc on drums, and the guy who is such an example of a stay-home bass player he's under house arrest, Willy Jak. The 'Armageddon Survival Guide' is gonna kick the shit out of you. It's gonna scare the fucking Jesus out of God and all his sissy angels. We're not sure how Satan will take it, but we don't believe in him anyway, so fuck Satan. Let your head get smashed in by the 'Armageddon Survival Guide', brought to you by those Messiahs of the UN-sane, the DAYGLO ABORTIONS."

A1. Your Facebook Can Kiss My Assbook
A2. Cockroaches
A3. Another Boring Day
A4. Velcro Shoes
A5. Sick Of The Lies
A6. They Hate Me
A7. Aliens From Outer Space
A8. I Love My Mom
B9. The Dishwasher
B10. The New Black
B11. Left Handed Nazis
B12. No More Bullshit
B13. To Prove That We Are Free
B14. Canadian Hate-triot 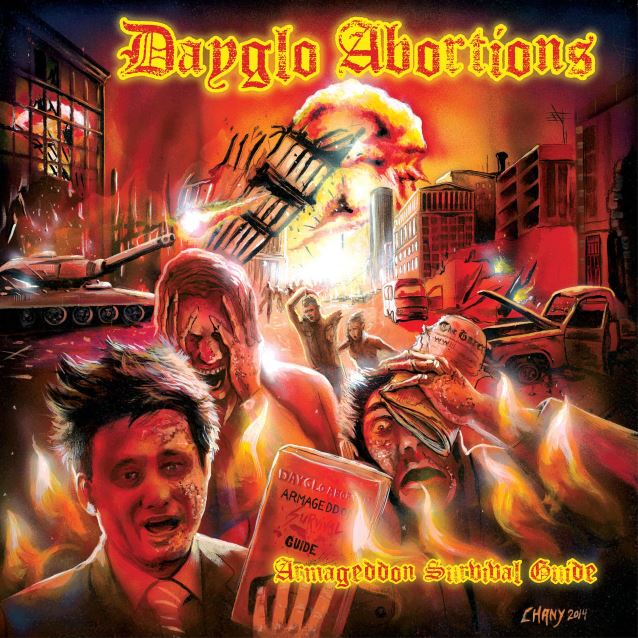