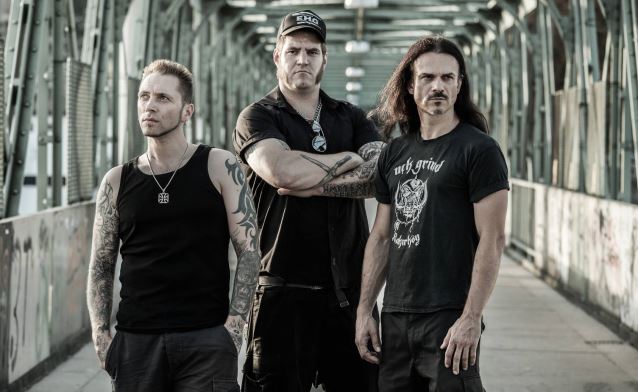 After a six-year break, PUNGENT STENCH is back in business.

Original composer, vocalist and guitarist El Cochino (Martin Schirenc) has once again beaten the odds by reanimating the filthy kings of odor, and is joined by his henchmen Danny Vacuum (GENOCIDE SS, THE ACCIDENTS) on bass and vocals and Mike G. Mayhem (HOLLENTHON) on drums.

Due to possible legal complications regarding the use of the name PUNGENT STENCH, the reborn triumvirate from Vienna, Austria will perform all future shows under the banner THE CHURCH OF PUNGENT STENCH.

Fans will finally get what they have been asking for for a number of years: An old-school setlist, including some rare and even never-before-played material, such as tracks from the 1989 split LP with DISHARMONIC ORCHESTRA, as well as classic smash hits from PUNGENT STENCH's first three albums.

The band is highly motivated and will play its first official show on Friday, December 13 at the Eindhoven Metal Meeting in The Netherlands. That day, THE CHURCH OF PUNGENT STENCH will perform alongside other highly respected artists such as NAPALM DEATH, BRUTAL TRUTH, VOMITOR, WATAIN, BELPHEGOR, TIAMAT and CARPATHIAN FOREST.