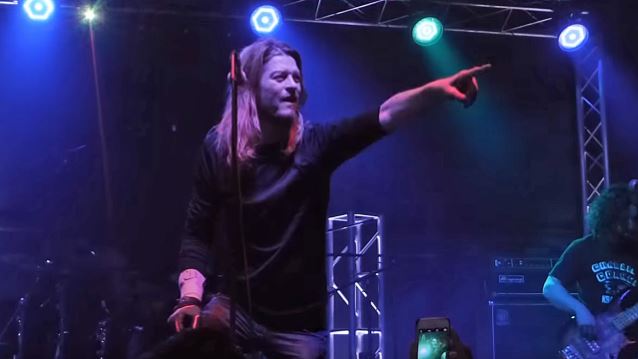 According to The Morning Call, PUDDLE OF MUDD singer Wes Scantlin cut short the band's concert Thursday (February 18) in Pennsylvania after berating the soundman for "ruining everybody's night."

A fan-filmed video has surfaced on YouTube in which Scantlin can be heard complaining about the onstage monitor going out and telling the soundman at The Gin Mill & Grille in Northampton: "You might be a sociopath, man. I'll call the entire Kansas City mafia on top of your ass right now!"

PUDDLE OF MUDD reportedly left the stage after the first song, but returned after about 15 minutes, and played around three more songs before Scantlin's final meltdown.

"We don't want this show to be about anger, okay?" Wes said. "We don't. This soundman, guy, whoever he is, he does not like PUDDLE OF MUDD very much."

He then told the soundman: "You're about to waste everybody's time, mister sound genius of the world." He added: "This is the last song that we’re gonna play because the sound man hates PUDDLE OF MUDD. He hates us. He has done nothing but bad things through the entire show, and he has ruined everybody's fucking night. And if you guys want to see who did it, it's the motherfucker right there."

As the other members of PUDDLE OF MUDD started playing the song "Blurry", Scantlin made a half-hearted attempt to sing the song, and several times shouted "You suck!" before throwing what appeared to be a water bottle.

The management at The Gin Mill & Grille posted a statement on Facebook early this morning in which it said: "Our goal is to bring national acts to The Gin Mill at affordable prices in a more personal midsized club venue and setting where every guest can get up close to the band. Last night, at our first concert event, folks definitely got a show. Unfortunately, maybe not totally the one they were expecting. Though those who follow PUDDLE OF MUDD know the singer has a long history of onstage meltdowns. As for The The Gin Mill & Grille, we'll continue to bring in national acts at very affordable prices, usually 30 dollars or less for tickets purchased in-house."

Scantlin last month stormed out of an Ohio show after a tirade in which he accused an audience member of stealing his house.

The singer was arrested in January for the second time in less than a month, this time for trespassing in and vandalizing a house that used to belong to him. According to TMZ, Scantlin returned to the house — which he lost to foreclosure last year — and was using a hatched to destroy parts of it. He allegedly trashed audio electronics, surveillance cameras and an alarm system while inside the home on January 9.

TMZ captured footage of Scantlin being led out of the home in handcuffs, telling police, "Come on, this is my house, man."

Scantlin was arrested in December on charges of possession of a controlled substance after being pulled over by police in Beverly Hills, California for having an expired registration on his vehicle.

When the officers at the scene realized there was also a warrant out for Scantlin's arrest, the car was searched and the alleged substance was discovered.

He was booked on misdemeanor drug charges for that incident and was released on $51,000 bail.

Scantlin was last arrested in early August in South Dakota, where police cited him for driving under the influence and being in possession of marijuana.

Previous to that, he was busted in Minnesota last July 26 for driving while intoxicated and leading police officers on a 100 miles-per-hour chase.

He forced the band to cancel a show in Flint, Michigan in June when he missed his flight. Before that, he was arrested in mid-April on charges of disorderly conduct after an incident at Milwaukee's Mitchell International Airport.

Scantlin was also arrested in January 2015 after taking what was described as a "joyride" into a restricted area on an airport baggage carousel at Denver International Airport.

He previously made news in April 2014 when he melted down onstage, threw a beer and microphone into the audience, and threatened several attendees with violence at a show in Scottsdale Arizona.

Going back to 2013, his arrests included one for vandalism against a neighbor's property, as well as one stemming from his 2012 cocaine possession case and another on charges of domestic violence.

Our goal is to bring national acts to the Gin Mill at affordable prices in a more personal mid sized club venue and... 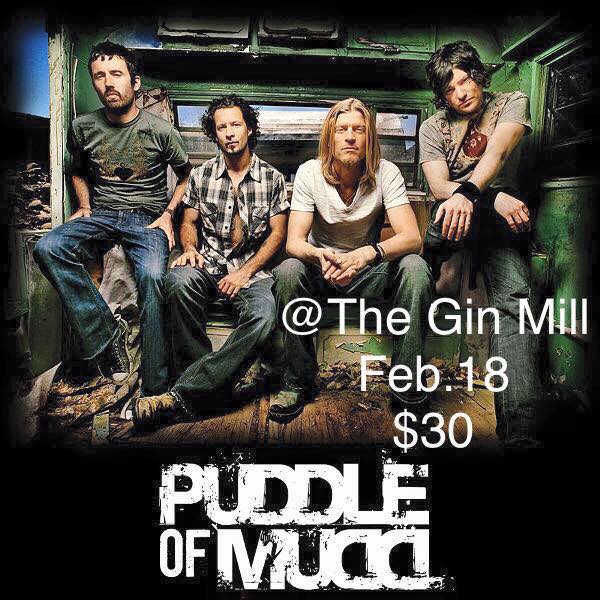