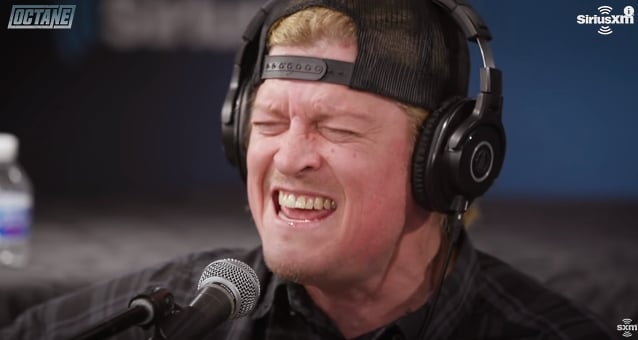 PUDDLE OF MUDD frontman Wes Scantlin has fired back at critics after his band's cover version of a NIRVANA classic went viral.

Over the weekend, Scantlin posted a message on social media in an apparent response to negative Internet chatter over who PUDDLE OF MUDD's rendition of "About A Girl", the 1989 track originally performed by NIRVANA.

Although PUDDLE OF MUDD's acoustic performance at the SiriusXM studios has been online since January, it only recently blew up on YouTube, with detractors blasting Scantlin's off-key take on the iconic song.

"I like the part where there's no singing," one user wrote while another said more brutally, "Kind of sounds like Kurt Cobain... if he was being sodomized with a cactus."

"Rise above others who try and take you down… I'm at my BEST NOW… and that's all that matters," he wrote. "I pray for all of you because we care. Jealousy is toxic, and toxic people are a waste of time. We walk away with nothing but a SMILE"

As of this writing, PUDDLE OF MUDD's version of "About A Girl" has surpassed one million views on YouTube with more than 18,000 dislikes and just around 2,700 likes.

Following a long period of time in which Scantlin had almost non-stop problems with the law, alcohol, finances and other issues, he finally got sober.

PUDDLE OF MUDD released its first album in a decade, "Welcome To Galvania", last year.