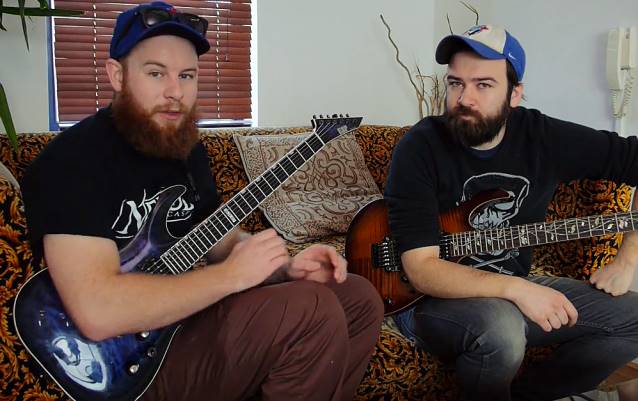 Luke Hoskin and Tim Millar of the Canadian tech-metal punk act PROTEST THE HERO recently showed U.K.'s Total Guitar magazine some of their favorite riffs from the songs "Underbite", "Clarity" and "Sex Tapes". Check out the clips below.

Download Total Guitar issue 253 for the accompanying tab and explanation — available in the U.K. and digitally worldwide via Newsstand for iPad, iPhone and iPod Touch and Zinio from April 14.

PROTEST THE HERO bassist Arif Mirabdolbaghi will sit out the rest of the band's current "Volition" touring cycle in order to focus on "other projects at home." His replacement on the road will be the band's longtime friend, producer and creative collaborator Cameron McLellan.

As previously reported, PROTEST THE HERO was honored in the "Metal/Hard Music Album Of The Year" category at this year's Juno Awards (the Canadian equivalent of the Grammy Awards), which was held on March 30 in Winnipeg after a week of musical celebrations across the city.

PROTEST THE HERO's fourth studio album, "Volition", sold around 11,400 copies in the United States in its first week of release to debut at position No. 20 on The Billboard 200 chart.