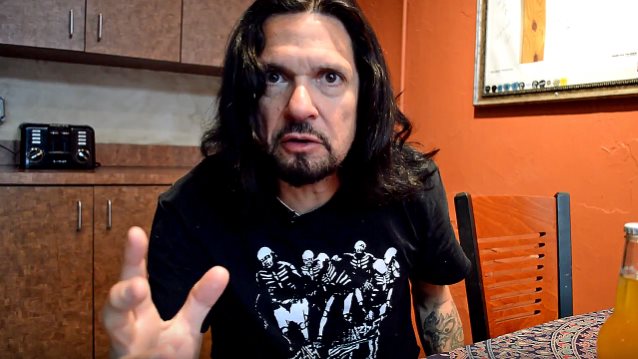 PureGrainAudio recently played a fun game of "Metal Or Not?" with PRONG mainman Tommy Victor, who shared his thoughts on such subjects as marathon running, skinny jeans, baseball and more. Check out the clip below.

Asked if Donald Trump is "metal or not," Victor said: "Donald Trump is definitely metal: anti-establishment, not very politically correct, [and he] pisses a lot of people off."

Tommy recently told YELL! Magazine usually doesn't get that heavily political in his lyrics. He said: "[PRONG's latest album] '[X -] No Absolutes' had little tinges of it. What I do, I take a box and I'll throw a little bit of politics with spirituality and punk rock mentality into this collage and that's what the lyrics seem to come out. That makes it PRONG, that makes it different, but, obviously, there's been a lot to pick and choose from. But it's all fake news anyhow."

He continued: "It's amazing. This is a Canadian show, or web site, so I don't know how slanted the news is up here, but it's unbelievable in America, where just a change of the channels you get a completely different perspective on everything. It's all paid off by somebody. Somebody is putting these knuckleheads on television to say what the advertisers want and the people with the money behind it who want to get their agendas across. It's an absolute joke. That's a stimulus for a lot of the lyrics right there.

"On '[X -] No Absolutes', which is the last record, we played this song tonight, 'Cut And Dry', it's about that. You're told something, then you believe it, then something happens that's contrary to your belief and then you're like, 'What happened?' I was like 'Well, you're an idiot. You listened to this nonsense to begin with.'"