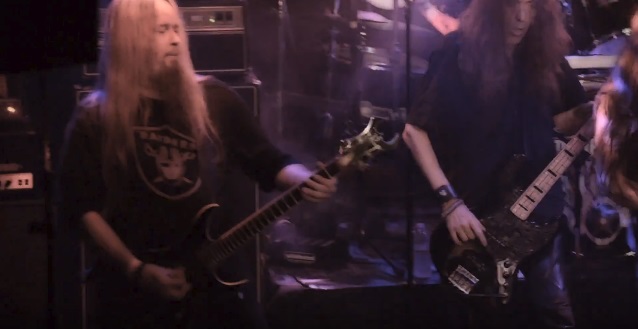 Also included in Tuesday's performance was Ira Black's son Ira Black IV on guitar, and his two stepsons, 13-year-old Austin Waggoner on drums and 15-year-old Nicolas Waggoner on vocals. Together, they call themselves DIVINE RETRIBUTION, and they performed "Repentless". The evening was hosted by former MTV personality and musical artist Jesse Snider (the eldest son of TWISTED SISTER frontman Dee Snider).

Founded in 2015 by QUIET RIOT's Chuck Wright, "Ultimate Jam Night" is a community-oriented weekly show featuring a rotating cast of world-class artists in a completely unrehearsed format. The event covers multiple genres and is free.

In January, SLAYER, one of metal's most popular and influential bands of the past four decades, announced its "final world tour" via a 30-second video. The group also confirmed that the first leg of its last-ever North American run of dates would feature support from LAMB OF GOD, ANTHRAX, BEHEMOTH and TESTAMENT.

All videos courtesy of Johnny Angel