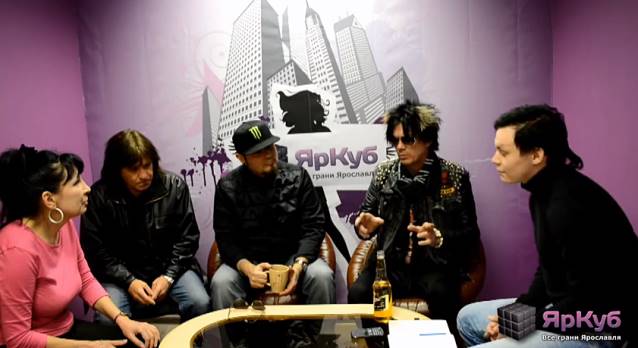 YarKub conducted an interview with PROJECT ROCK (formerly ROCKSTAR), the band featuring former and current members of JUDAS PRIEST, ALICE COOPER, OZZY OSBOURNE and AC/DC, during PROJECT ROCK's most recent tour of Russia in April. You can now watch the chat below.

In an interview with Russia's Classic Rock magazine conducted the same month, PROJECT ROCK lead singer Tim "Ripper" Owens, who has previously fronted JUDAS PRIEST, ICED EARTH, YNGWIE MALMSTEEN and DIO DISCIPLES, spoke about the progress of the recording sessions for the debut album from PROJECT ROCK, whose most recent touring lineup also featured Keri Kelli (SLASH'S SNAKEPIT, ALICE COOPER, RATT) on guitar, Simon Wright (DIO, AC/DC, UFO, DIO DISCIPLES, Geoff Tate's QUEENSRŸCHE) on drums, Rudy Sarzo (OZZY OSBOURNE, QUIET RIOT, WHITESNAKE, DIO) on bass and Teddy "Zig Zag" Andreadis (GUNS N' ROSES) on keyboards. "I just finished the vocals," he said. "I flew from L.A. — I was in the studio with Keri — I flew directly here. The vocals are done. It's almost done. Probably, like, a September release, maybe. But it's gonna be great. We're really looking forward to it. Keri and I busted our butts on it, especially Keri."

PROJECT ROCK's debut album is expected to contain 13 songs, including "Here's To Us", which is one of three original tracks that were performed during the band's latest tour.

Speaking to Eric Blair of "The Blairing Out With Eric Blair Show" at the March 17 exclusive VIP listening party for the Ronnie James Dio tribute album "This Is Your Life" and awards gala at the Avalon in Hollywood, Owens stated about PROJECT ROCK: "Keri Kelli is talented. I mean, that guy, I love to work with Kerri. He's funny because he has so much enthusiasm. And we write these songs together, and he sends back the finished demo, and it's, like, 'Holy crap!' Our demo sounds like it's a real CD. Keri's great."

PROJECT ROCK has already completed several tours of Russia where it played classic songs from the bandmembers' respective bands.

Video footage of PROJECT ROCK performing "Here's To Us" on April 18 at Izvestia Hall in Moscow, Russia can be seen below.

The studio version of "Here's To Us" was premiered last October on "Drive Time Morning Show with Evgeny Shtoltz".

PROJECT ROCK's lineup for the April 2014 Russian tour was as follows: 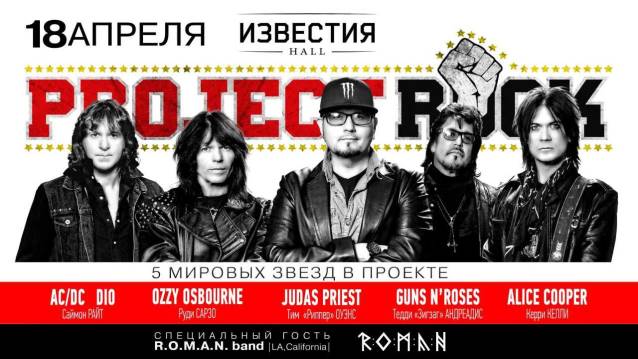