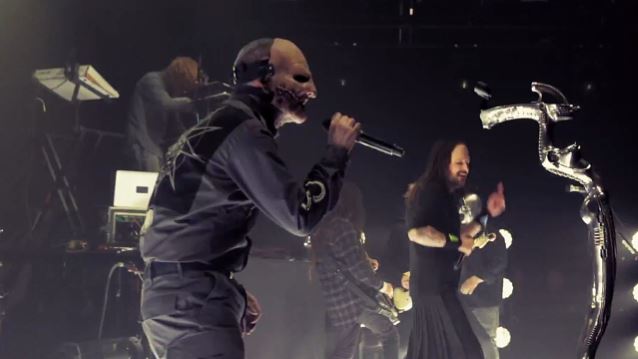 Members of SLIPKNOT joined KORN on stage on January 23 at The SSE Arena in London, England during the two bands' joint U.K. tour to perform at cover of the BEASTIE BOYS song "Sabotage". Newly released professionally filmed video footage of the collaboration can be seen below.

Asked during an online question-and-answer question how he and KORN singer Jonathan Davis came up with the idea of covering "Sabotage", Taylor said: "Well, me and Jonathan did not come up with that idea, actually. That was [KORN bassist] Fieldy's idea. We had been kinda joking about doing something together at one of the shows, and Fieldy was, like, 'Why don't we just do 'Sabotage'?' We all kinda dug it, we got together, we jammed it out, and the rest is history. So, good on you, Field."

Prior to the London concert, a posting on KORN's Instagram account hinted that the two bands were "maybe doing a cover tonight in London" with a photo of the musicians performing together in soundcheck.

In an October 2014 interview with the "Metal Hammer Radio Show", SLIPKNOT singer Corey Taylor stated about touring with KORN: "Not only were they the band that we loved, but we also aspired to what they had. It wasn't until a handful of years later that we actually got to meet them and we got to know them, we got to be very close with them, to the point where now it's very weird to think that [KORN frontman] Jonathan Davis has me on a first-name basis. It's crazy when the bands you look up to become your peers; that's a pretty big statement to what you've done, especially with that band, because I have so much respect for what they've been able to do and what they've accomplished, and just how far they've been able to push their music. I mean, it's fantastic. This is something that we've been trying to put together for a very, very long time. Just putting together a tour with them and finally, finally we get to do it and it just felt like the right time. They were available, we were ready to do it and the rest is going to be history."

Davis was similarly excited about sharing the stage with SLIPKNOT, telling a radio station in Philadelphia: "We've been longtime friends with the SLIPKNOT guys, so we're really excited to be doing this tour… We've done stuff together… We had Corey come out and sing 'Freak On A Leash' one time live, and then when I got sick back in Europe in '06, he covered for me on a show and sang a couple songs, because I was in the hospital and couldn't perform." 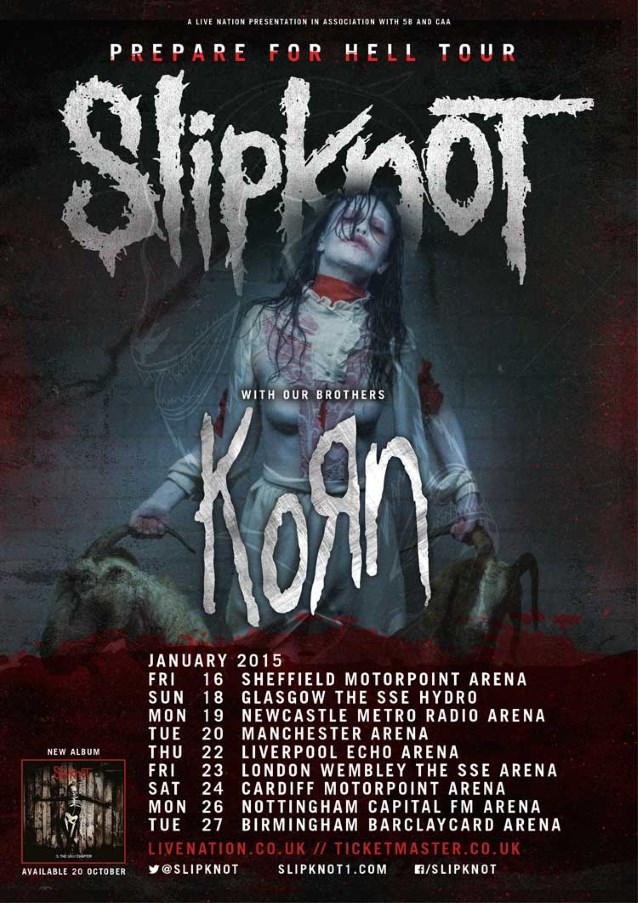