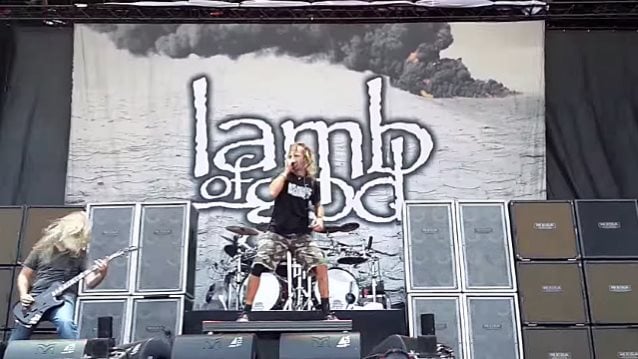 Professionally filmed video footage of Richmond, Virginia metallers LAMB OF GOD performing their new song, "Still Echoes", live for the first time on June 5 at the Rock Am Ring festival in Mendig, Germany can be seen below.

"Still Echoes" is taken from LAMB OF GOD's new album, "VII: Sturm Und Drang", which will be released in July via via Epic in the U.S. and Nuclear Blast Entertainment, with whom the band signed a record deal for all territories outside of North America. The CD was once again produced and mixed by Josh Wilbur with engineering by Wilbur, Nick Rowe and Kyle McAulay, and was recorded at NRG Recording Studios in North Hollywood, California and Suburban Soul Studios in Torrance, California.

LAMB OF GOD frontman Randy Blythe told Billboard.com that the subtitle of "VII: Sturm Und Drang" — which is German for "storm and stress" — indirectly refers to his experience of being arrested at the Prague, Czech Republic airport on June 27, 2012 and being accused of shoving a local fan off the stage during LAMB OF GOD's May 2010 concert in the city. The man, who is said to have stormed the stage three times during the show, reportedly suffered a brain hemorrhage that resulted in his death nearly a month later. Blythe was eventually acquitted of all charges after a panel of Czech judges ruled that concert promoters — and not Blythe — were largely to blame for the fan's death.

According to Blythe, he wanted the title to reflect the new album's lyrical themes, which deal with the psychology of humans reacting under extreme conditions. "I was, like, 'Maybe the Germans have something,' because they're great at cramming complex concepts into, like, one word, like 'schadenfreude' and 'zeitgeist,'" he said. LAMB OF GOD guitarist Mark Morton, whose mother is German, came across the title while researching German vocabulary. ["Sturm Und Drang" was used as the name of a German literary movement of the 18th century, and it refers to a state of uneasiness and usually resentment brewing to an eventual explosion.]

"I didn't set out to write this record about my perception of how people handle stress and difficulties … but as I was writing, it kind of started coming to me," said Blythe, who wrote ninety percent of the album's lyrics. He also went on to describe "VII: Sturm Und Drang" as "the most cohesive record we've done in a long time" and not as "schizophrenic" as some of LAMB OF GOD's previous albums.

Blythe told RollingStone.com that "Still Echoes" "is a history of [Prague's] Pankrác Prison," where he was incarcerated for over a month. The first line of "Still Echos" reads: "A thousand heads cut clean across their necks, right down the hall from me." Blythe says: "There was a guillotine right down the hall from me, from when the Nazis had the prison. From 1943 to 1945 they executed almost 2,000 people by the guillotine, because it was cheaper than shooting and quicker than hanging … They call it the Pankrác 'Saw Room' or the 'Axe Room. I sat there at night, and I’d think about all those dudes that got their heads chopped off— men and women — in that place not too far from me."