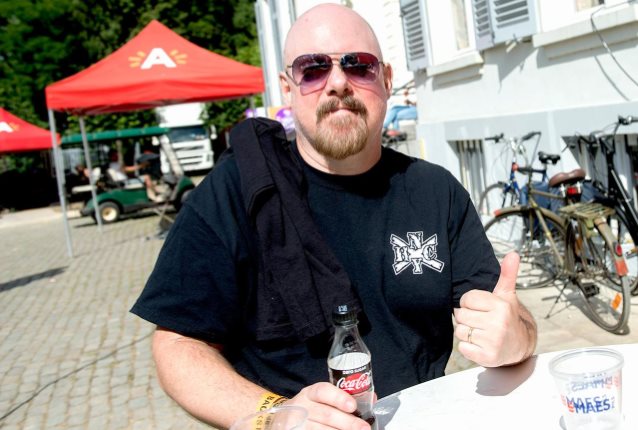 Gary Meskil, the singer of PRO-PAIN who was violently robbed in Brussels on July 3, spoke exclusively to music journalist Tom De Smet of Gazet van Antwerpen about the incident.

Meskil suffered extensive injuries when he was "struck on the head with an ice pick" before being set upon by a group on individuals. He was admitted to hospital and is currently recovering after the horror attack.

The PRO-PAIN frontman broke his silence about the assault to Tom De Smet while attending the Antwerp Metal Fest this past Sunday (July 9). PRO-PAIN played the festival in 2016 and 2015, so when the organizers heard about what had happened to Meskil, they offered him a backstage pass so he could relax a bit among friends of the metal scene. Bands that played Antwerp Metal Fest this year included SEPULTURA, DEATH ANGEL and VADER.

Recalling what happened, Meskil said: "Last Monday, I went out with Adam [Phillips, PRO-PAIN guitarist] in Brussels. Adam returned to the hotel in the Stalingradlaan in the centre of Brussels, and I went for a beer in a bar nearby, around midnight. At the table next to me, there were some young guys and we started talking. It was all very friendly. Just a nice chat. After a while, I went to the bartender to pay my bill. When I returned, two of the guys I had talked to bumped into me. Then I realized that they took my wallet. I confronted them and they start hitting me. They got help from four others. They used an ice pick to hit me on the head. They kept on kicking me after I had fallen to the ground."

He continued: "They robbed me of a lot of money: the fees of several shows. I lost eighty percent of my blood. The doctors said that I was lucky to make it. They even had to remove glass from my eyes, because they kicked the glasses I was wearing. My jaw is broken, and I will need multiple surgeries. I don't know when I will be able to sing again. It can take weeks, possibly even months."

Meskil added that he is usually on his guard and can normally sense danger before it's too late, but he admitted that he "didn't see this coming."

According to Gary, the police have "arrested some of the guys who did this" and he will "have to go to the police station [on Monday] to identify them. But the money [that was stolen] is gone."

As a result of Meskil's injuries, PRO-PAIN was forced to cancel its concerts in Roeselare, Belgium (July 7) and Osnabrück, Germany (July 8).

Meskil's family has launched a GoFundMe campaign to cover the musician’s medical bills.

PRO-PAIN was touring in support of its latest album, "Voice Of Rebellion", which was released in June 2015 through SPV/Steamhammer.