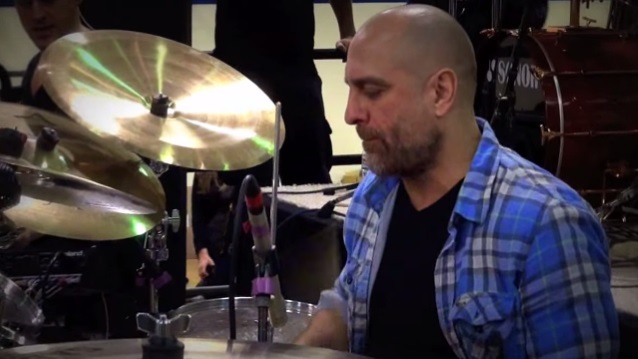 Drummer Tim Alexander, who has played with PRIMUS, PUSCIFER and A PERFECT CIRCLE, has suffered a heart attack and will undergo open heart-surgery in a couple of days.

Alexander, 49, originally left PRIMUS in 1996 and played sporadically with the band in the early 2000s in addition to being involved with various other groups, including LAUNDRY, A PERFECT CIRCLE, PUSCIFER and a solo project. Before he rejoined the Les Claypool-led PRIMUS in 2013, he played on several of the band's albums, including 1991's "Sailing The Seas Of Cheese" and 1993's "Pork Soda".

Alexander was the first drummer of A PERFECT CIRCLE, performing early live shows with the band, and recording drums for the track "The Hollow" on the band's debut album, "Mer De Noms". He is listed as a member in the band's DVD/CD release "aMOTION".

Alexander is a member of Maynard James Keenan's PUSCIFER project. He has toured with them and can be heard on several of their recordings.

In a 2013 interview with DRUM! magazine, Alexander said, "After leaving PRIMUS [the first time in 1996], I immediately started LAUNDRY with my friends and we did that for a little while. Then I had also done an album with ATTENTION DEFICIT as well — two of them, actually. After that, I ended up in Vegas at Blue Man Group. But even long before that, I was going through a lot of changes, and kind of not knowing what to do, and really feeling lost. Sitting down and playing wasn't satisfying and wasn't fun. I've been going through that probably for the last ten years, not really sure if that's what I should be doing. It wasn't so much the drumming, but just other aspects, relationships, that kind of thing. I think I was probably wanting to be more of like a Dave Grohl, writing my own songs, and playing other instruments. And so that's why I made my own record, which was called 'Fata Morgana'. I wasn't thinking it was going to really do anything, I just felt like I needed to make something by myself. And, you know, it turned out pretty good."