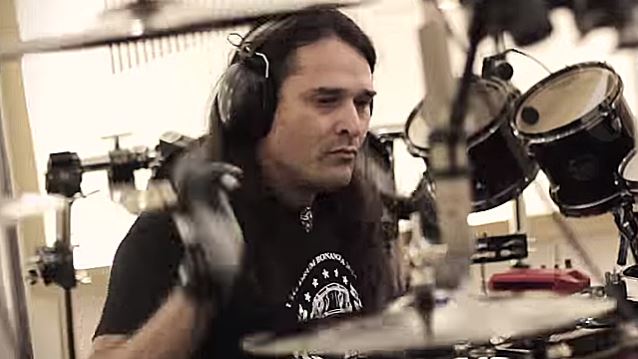 Video footage of new PRIMAL FEAR drummer Aquiles Priester (HANGAR, ANGRA) performing the band's song "Angel In Black" in the studio can be seen below. The track is taken from PRIMAL FEAR's "Nuclear Fire" album, which came out in 2001. The clip was recorded and mixed by Thiago Bianchi at Estúdio Fusão in São Paulo, Brazil. Video footage and editing by Junior Carelli of Foggy Filmes in São Paulo, Brazil

Priester, who was born in South Africa but moved to Brazil while he was still a child, made his live debut with PRIMAL FEAR on December 20, 2014 at the Knock Out Festival in Karlsruhe, Germany.

Priester joined PRIMAL FEAR in September 2014 as the replacement for Randy Black, who left the group a month earlier.

In 2010, Priester was one of seven drummers (alongside Mike Mangini, Peter Wildoer, Marco Minnemann, Virgil Donati, Derek Roddy and Thomas Lang) chosen from all over the world to take part in the audition process to replace Mike Portnoy in DREAM THEATER. After the audition, Aquiles was recommended by DREAM THEATER's John Petrucci to Tony MacAlpine, who took Aquiles out on tour with him in the beginning of 2012. In 2010 and 2013, Aquiles also went on the road with another American guitar virtuoso, Vinnie Moore (UFO).

The Canadian-born Black announced his departure from PRIMAL FEAR effective August 16, 2014, one day after the band's performance at the Summer Breeze festival in Germany. His exit from the group was attributed to "irreconcilable differences" between the drummer and PRIMAL FEAR vocalist Ralf Scheepers, but no further details were given.