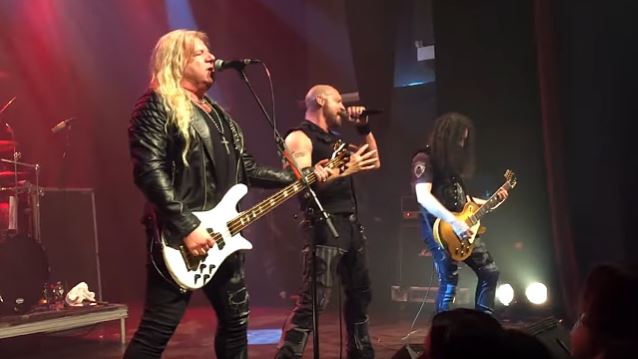 German power metallers PRIMAL FEAR are putting the finishing touches on their new concert DVD, to be released in 2017. A couple of preview clips are available below.

As previously reported, PRIMAL FEAR will celebrate its 20th anniversary next year with a special concert in the band's home country. Vocalist Ralf Scheepers told Metal Master Kingdom before a recent gig in Toronto: "There are now negotiations for one big [anniversary] show. I don't wanna tell so much, because it's gotta be a surprise. There's still one year to plan and to schedule things."

PRIMAL FEAR last year parted ways with Brazilian drummer Aquiles Priester (HANGAR, ANGRA) and replaced him with Francesco Jovino (U.D.O.). In addition, founding PRIMAL FEAR guitarist Tom Naumann — who had been touring with the group for a couple of years — officially rejoined the band as a full member.

In an interview with Antihero Magazine, PRIMAL FEAR bassist Mat Sinner stated about the band's enduring popularity: "I think we enjoy our job. We're playing a lot of shows and we are still really happy to do this. We like our job and every live show is a new challenge. We really enjoy to go on stage everywhere in the world. Have some fans and make a great night of rock with them. The fans really appreciate it if they see that you're really giving a hundred percent every night and have fun, like to communicate. This is important. This was, during the last years, I think, very strong for us, which made PRIMAL FEAR even stronger. That the fans really appreciate our attitude. That's one point."

In 2017 we will release a Primal Fear live DVD including one complete filmed show during our European tour, plus one filmed bonus song which was recorded at the Masters Of Rock Festival in Czech Republik. There will be plenty of bonus material and many surprises on top! So stay tuned for more details - Cheers, Ralf

We are working hard on the final mixes and video cuts for our forthcoming LIVE DVD which is to be released in 2017, so here is another tiny snippet for you to watch....enjoy! Cheers, Ralf and the PF gang!