One Dutch date has been announced for the "Priest Feast" tour featuring JUDAS PRIEST, MEGADETH and TESTAMENT.

The schedule is now as follows:

JUDAS PRIEST's new double-disc concept album, "Nostradamus", has sold more than 90,000 copies in the United States since its June 17 release, according to Nielsen SoundScan. The CD shifted 42,000 copies in the United States in its first week of release to debut at position No. 11 on The Billboard 200 chart. This marks the band's highest-ever chart position in the U.S. In Canada, the CD opened at position No. 9 after shifting close to 4,000 units.

According to a posting on MEGADETH's web site, acclaimed British record producer/engineer Andy Sneap (MACHINE HEAD, NEVERMORE, EXODUS, ARCH ENEMY) arrived on September 28 to meet up with MEGADETH mainman Dave Mustaine and the crew at the band's new studio near San Diego, California. The studio is being custom-built to record the next MEGADETH album and more.

Sneap produced MEGADETH's last album, "United Abominations", which came out in May 2007 via Roadrunner Records.

TESTAMENT's new album, "The Formation of Damnation", is available on limited-edition green vinyl at www.testamentlegions.com. Supplies are limited to 2,500 copies worldwide, so order your copies today before they sell out! "The Formation of Damnation" limited-edition green vinyl also ships with a bonus poster and band logo patch. 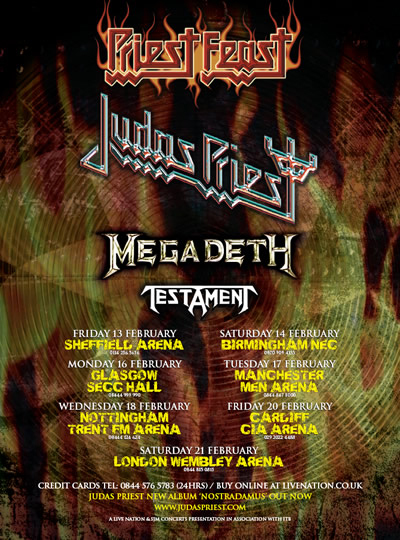