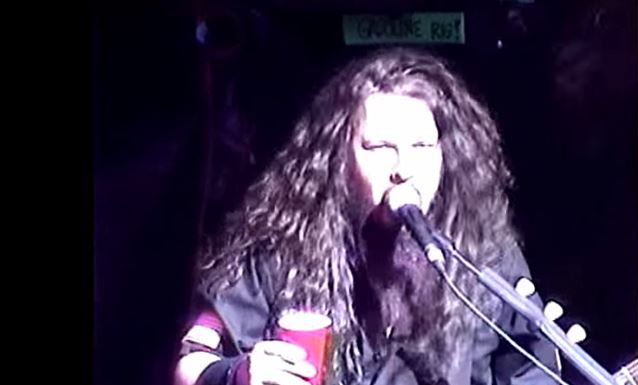 Previously unseen video footage of the December 31, 2001 performance by GASOLINE, the metallic southern rock side project of then-PANTERA members "Dimebag" Darrell Abbott and his brother Vinnie Paul Abbott (drums) has been uploaded to YouTube by a fan named Chris Stiles and can now be seen below. The concert, which took place at the Bronco Bowl in Dallas, Texas, reportedly marked the final time the two Abbott brothers played with PANTERA bassist Rex Brown. Also on the bill were DROWNING POOL, SEVENDUST and UNION UNDERGROUND.

In addition to Dimebag and Vinnie Paul, GASOLINE featured PUMPJACK vocalist Thurber T. Mingus and bassist Sean Time. The band played covers by TED NUGENT, THIN LIZZY, PAT TRAVERS and METALLICA, as well as six originals, all of which were reportedly demoed in the weeks leading up to the event.

A few days prior to the gig, Vinnie Paul spoke to MTV News and explained how GASOLINE came together.

"PANTERA hasn't played on New Year's Eve for a while, and sitting around the house watching Dick Clark ring in the New Year kind of sucks," he said. "That's why we put this thing together."

"Our big hit is 'Gas Tank', and the lyrics are, 'This ain't no beer belly, this is a gas tank for my love machine,'" Vinnie Paul added. "Basically, that's what GASOLINE is all about — booze and women."

Dimebag and Vinnie Paul formed PANTERA in the mid-eighties in Texas. The band recorded four independent albums before their 1990 major label debut, "Cowboys From Hell", introduced a heavier sound and made them a favorite with metal fans. 1994's "Far Beyond Driven" debuted at No. 1 on The Billboard 200 without benefit of a commercial hit single.