The next issue of Germany's Rock Hard magazine — which will be made available on February 22 — comes with an exclusive OVERKILL / KREATOR split seven-inch vinyl single, featuring the unreleased KREATOR track "Warrior Heart". The song was recorded during the "Gods Of Violence" sessions but has not been released — until now. OVERKILL can be heard with its rare rendition of Johnny Cash's "Man In Black", which was originally included on the band's career-spanning box set "HistoriKill: 1995 – 2007", released in 2015.

The artwork for the single was created by Jan Meininghaus, who also was responsible for the "Gods Of Violence" cover (European version).

You can listen to snippets of both songs below.

KREATOR's latest album, "Gods Of Violence", entered the official chart in Germany at position No. 1.

OVERKILL is touring in support of its latest album, "The Grinding Wheel", which was released on February 10 via Nuclear Blast. The disc was produced by OVERKILL and mixed by Andy Sneap (MEGADETH, EXODUS, ACCEPT). The artwork was created again by Travis Smith (NEVERMORE, OPETH, SOILWORK, DEATH). 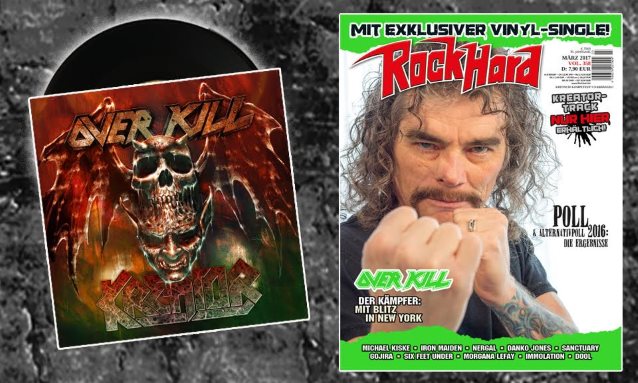