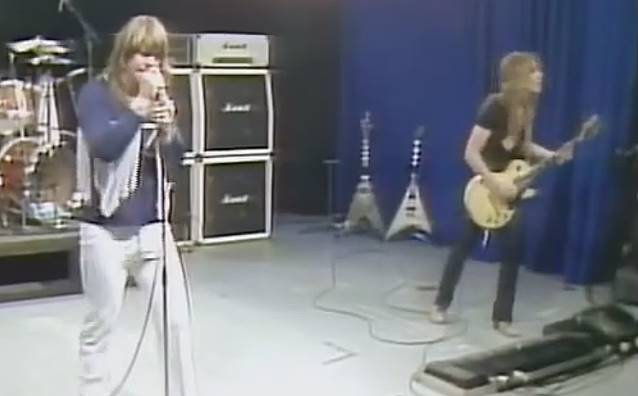 With Wednesday (March 19) marking the 32nd anniversary of the death of original Ozzy Osbourne solo band guitarist Randy Rhoads, the group's original bass player, Bob Daisley, posted some excerpts online of the seven hours of audio he recorded during the writing, rehearsing and recording sessions for Ozzy's first two classic solo albums, 1980's "Blizzard Of Ozz" and 1981's "Diary Of A Madman".

Check it out at this location.

According to The Pulse Of Radio, Daisley told Rock Cellar in a 2012 interview that the 30th-anniversary reissues of both albums could have featured the material as bonus content. He explained, "I offered to supply tapes of our rehearsals and writing sessions, to go as proper bonus material. And I just said that I wanted a royalty out of it, because it's my stuff. But they wouldn't do it because they didn't want to give me a royalty — they just wanted to buy it."

Rhoads and two others were killed on March 19, 1982 when the small plane they were flying in at Flying Baron Estates in Leesburg, Florida struck Ozzy's tour bus then crashed into a mansion. Rhoads was 25 years old.

Daisley said that he had "hours and hours of tapes" from the recording sessions, adding, "You can hear the songs changing, the different parts taking shape, and all this stuff would have been perfect bonus material for the box set. Sadly, the Osbournes are just too greedy and self-absorbed."

Daisley's and drummer Lee Kerslake's parts were removed from an earlier reissue and replaced by new recordings played by METALLICA's Robert Trujillo and FAITH NO MORE's Mike Bordin after a dispute with Sharon Osbourne over royalties. They were restored for the 30th-anniversary editions.