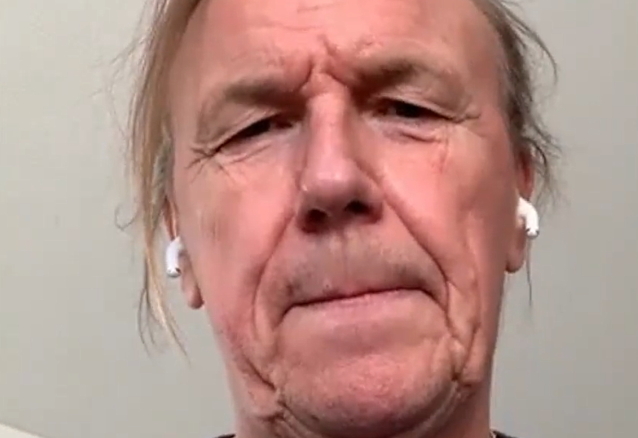 PRETTY MAIDS singer Ronnie Atkins, who is battling stage four cancer, spoke about his condition during a recent interview with Finland's Kaaos TV. Reflecting on how he first got diagnosed with the disease. Ronnie said (transcribed by BLABBERMOUTH.NET): "I had some symptoms. I had some pain issues in my back — in my shoulder. But I had that for 15, 20 years, so to begin with, I just thought I struck a nerve or something like that. And I went over to the doctor, and he checked me. And he actually thought that as well. But my mother died in 1988 when I was 22 years old, and she had the same kind of symptoms, and I just had a bad gut feeling. And I said to him, 'I think you should send me down for some X-rays and stuff, just to be sure.' And he said, 'Well, let's do that, just to make sure there is nothing wrong.' A couple of hours later, I had a phone call from him that they actually found something — found a spot in the top of my lungs. And then I went through a whole process with CT scans, PET scans and bronchoscopies. And they took biopsies to find out what kind of cancer it was — if it was cancer. And long story short, it was cancer."

He continued: "I had surgery in September 2019. And then I waited five or six weeks, then I had to go through chemotherapy for three months and radiation therapy; I had 33, all in all. So, yeah, I was basically not capable of doing much at the time being. I didn't get really sick from the chemo, but I had pain issues from the surgery, so I was on morphine for quite a while and I was just tired. And then in February [2020], after the first scans, they said, 'Everything looks good, and we think you may be cured. But, of course, you have to go to control for the next five years.' And only six weeks after, when I went to a control, they found that my cancer spread to the bones, to one of my ribs. And that's when it got really serious, because then it was diagnosed as stage four, 'cause it spread outside the area where it actually started. And that's when I panicked for a while, because I wasn't prepared for that. I mean, I wasn't naïve — I, of course, knew that eventually [the cancer] may return, but not that fast. And that surprised the doctors as well. And that's what I've been living with ever since that. And I got another five radiation therapies — stereotactic radiation — and that kind of killed the metastases that set in the rib. And since that, I've had immunotherapy, and actually, I've been doing pretty good since that."

Atkins admitted that being told he had stage four cancer was "mentally hard to cope with" and it took him "quite a while" to accept the diagnosis. "But I'm still here, man, one year after, 'cause that was just after the lockdown started [when I was told I had stage four cancer]," he said. "And I'm still feeling good. And I've just been checked again, and it still looks good. I've just gotta be positive."

Asked if it's still possible shrink the cancer or put it in remission, Ronnie said: "Not really. I'm [in] what they call life-prolonging treatment. When they call it stage four, it's, in principle, incurable. Most people die within a year — that's what the statistics say. But there's three or four percent that are still alive after five years. I've just gotta believe in a miracle. I've just gotta hope that I'm one of those three or four [percent]. So, that's where it's at."

After the 56-year-old Atkins was diagnosed with lung cancer in 2019, he underwent at least 33 radiation and four chemotherapy treatments in the fall of that year before being declared cancer-free. In October 2020, he announced that his cancer had returned.