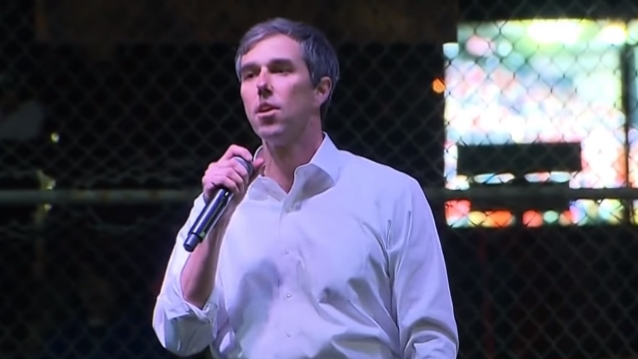 Democratic presidential candidate Beto O'Rourke says that it would be "an honor" to have THE MARS VOLTA perform at his inauguration if he were to win the 2020 election.

As a high schooler in El Paso, the former Texas congressman was in a called band FOSS with Cedric Bixler-Zavala, who would go on to front THE MARS VOLTA and AT THE DRIVE-IN.

At a campaign stop earlier today at Penn State University, the 46-year-old father of three was asked by a student named Joe Phillips if he would have THE MARS VOLTA play his inauguration. He responded (see video below): "It would be an honor to have THE MARS VOLTA play anything along the campaign or in this presidency. Cedric and Omar [Rodríguez-López, guitar]… That group is one of the most talented collections of individuals, and I'm really proud that they're from El Paso."

The failed senatorial candidate invigorated Democrats in Texas and earned national media attention for a 2018 campaign that nearly ousted Sen. Ted Cruz, but fell short by about 3 percentage points.

O'Rourke announced his presidential campaign on Thursday and raised $6 million in the first 24 hours.

In a 2012 interview with Fusion Magazine, O'Rourke was asked what kind of music he liked. "I guess my heart is in the music I grew up with which is punk rock; the music and the bands that first got me excited about playing music and being involved in cultural life," he responded. "I also have a spot in my heart for old British invasion stuff, THE WHO, THE BEATLES, THE [ROLLING] STONES, THE KINKS. I love all those bands. As I get older, I keep thinking that I'm going to lose my taste for punk rock, the kind of aggressive music, idealistic music of my youth, but it's still my go-to music."