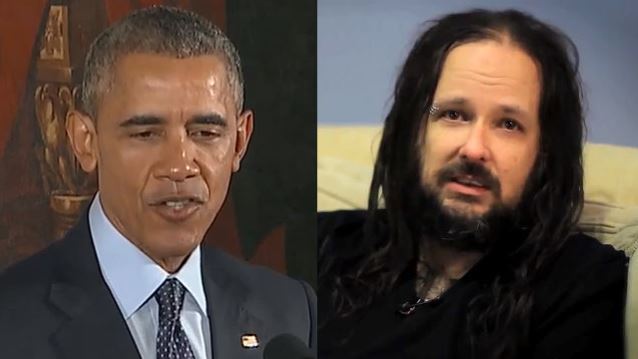 While awarding the Medal Of Honor at the White House earlier today (Thursday, November 12) to a former Army captain who tackled a suicide bomber in Afghanistan and was badly injured in the August 2012 attack, President Obama recounted a moment during the captain's recovery when KORN singer Jonathan Davis appeared at his bedside. The 32-year-old Florent Groberg thought he was hallucinating, Obama said, adding that Thursday's ceremony also was "all real."

Groberg, who needed 33 surgeries to save his leg after tackling the bomber, is the newest Medal Of Honor winner and President Obama relayed the captain's story during the award presentation.

"Flo thought, 'What's going on? Am I hallucinating?'" Obama said about what Groberg saw when he awoke in the hospital. Obama then joked: "Today, Flo, I wanna assure you you are not hallucinating. You are actually in the White House. Those cameras are on, [and] I am not the lead singer from KORN."

The comments can be seen in the first 90 seconds of the video below.

Groberg is the tenth living service member awarded the nation's highest honor for battlefield bravery in Iraq or Afghanistan.

Davis told conspiracy theorist Alex Jones in a 2014 interview that the title of KORN's latest album, "The Paradigm Shift", reflected his view that "all our liberties are being taken away one by one." He said: "I think it's time for us as normal people to come up and fight against the powers that be." He added, "Nobody cares what's going on behind the closed doors when Obama makes all these crazy laws that take away more and more of our privacy. It'll make you more of a dictator."

Davis also elaborated on why he thought the President was headed in that direction, saying, "I think he's an Illuminati puppet. It just doesn't make sense, the whole thing. The guy comes from out of nowhere, he gets made president, all this stuff starts happening… I don't know much about it, I'm just worried about my privacy and my children's privacy. This being America, we're supposed to be the 'land of the free,' and it's becoming a police state."