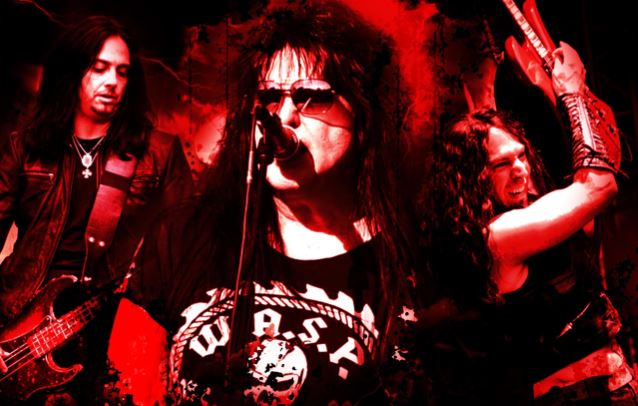 The official lyric video for the song "Scream" from W.A.S.P. can be seen below. The track is taken from the band's fifteenth studio album, titled "Golgotha", which will be released on October 2 via Austria's Napalm Records.

Commented W.A.S.P. frontman Blackie Lawless: "'Scream' was the track we felt really opened the album with the kick we were looking for. The animation on the video is outstanding and truly takes you on a trip. 'You're gonna cry if you want me, You're gonna lie if you love me!' It's enough to make you wanna scream!"

Lawless previously stated about the making of the "Golgotha" CD: "The rehearsals for this album started in the spring of 2011. A lot of time was spent just talking about the direction of the songs and really trying to turn the songs inside out to see exactly where they wanted to go.

Regarding the previously released song "Last Runaway", Lawless said: "Forty years ago I came to Hollywood as a teenager. Terrified and scared out of my mind, I had no idea what waited there for me. The song 'Last Runaway' is an intensely personal account of what happened to me, not only then but over the years and the success that followed after. Be it a kid looking for success in the music business or any life-challenging endeavor that someone would 'run away' from in life, I'm certain that everyone can relate to this story one way or another. It's another kid 'chasing the dream' and trying to survive it in the process. We've all been there."

Drummer Mike Dupke recently left W.A.S.P. after a nine-year stint with the band. He has since been replaced on the road by YNGWIE MALMSTEEN drummer Patrick Johansson.