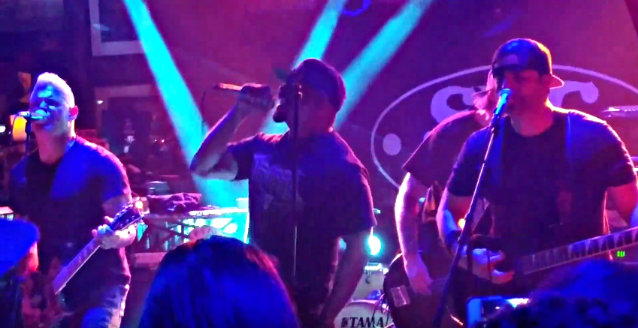 Of the "Resistance" lyric video, Sen Dog commented, "We're here to make honest music. It's not about pleasing anybody or confirming anything. We're creating from a pure place. We worked our asses off. It's not a one-time thing. It's just the first POWERFLO album. There's much more to come..." Graziadei added: "Getting our music out there has been a while in the making but I'm looking forward to finally having POWERFLO in everyone's hands. We dropped a video for 'Resistance' first since it basically sums up how we all roll, living life on our terms! Our lives, our way, rising up against any force that stands against us. Next up, live POWERFLO in your face like a shotgun blast!"

The origins of POWERFLO can be traced back over more than two decades as the members of the band would collaborate on numerous occasions. In addition to both CYPRESS HILL and BIOHAZARD appearing on the landmark platinum-selling "Judgment Night" soundtrack, Sen Dog delivered a cameo on BIOHAZARD's "State Of The World Address" in 1993, while Christian both guested on CYPRESS HILL's chart-topping 2000 double-album "Skulls & Bones", which Roy also guested on, and 2001's "Stone Raiders" in addition to performing with the group countless times. In 2015, longtime friend Roy played demos for Sen on a ride to the airport. The music immediately spoke to the rapper and thus POWERFLO was born.

Regarding how the name for the new project came about, Christian told The New American Media: "Basically, Sen Dog was spitting his game on some of the heavy riffs and shit. And he was, like, 'Do you like this?' And Roy, the other guitar player, said, 'Yeah. A power flow. That's good.' So that's where it kind of came from."