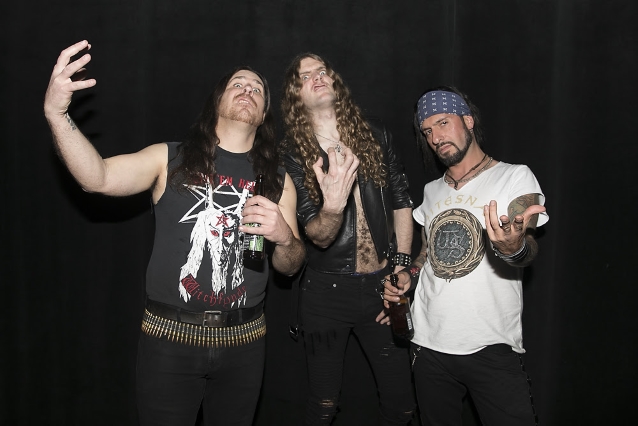 POUNDER specializes in dealing out classic heavy metal tunes, expertly crafted and executed, drawing from their NWOBHM influences with hints of early '80s speed metal, Sunset Strip flash, and AOR accessibility. The band was born out of the members' long-standing love for classic NWOBHM and traditional metal in general. After kicking around in the backburner of main songwriter Matt Harvey's (of EXHUMED, GRUESOME and EXPULSION) imagination for a few years, he and bassist Alejandro Corredor (NAUSEA LA, live bassist for VALLENFYRE) met guitarist Tom Draper (CARCASS, ex-ANGEL WITCH, CROWNING GLORY), an Englishman relocated to California, and they quickly bonded over their love of classic metal and hard rock.

It didn't take long for things to start coalescing for POUNDER once Harvey decided to take over vocal duties himself, after searching for a singer without any luck. In February 2017, the trio (with the aid of North Carolina-based session drummer Carlos Donegean) entered Trench studios in Corona, California to record seven songs, four of which became their "Heavy Metal Disaster" demo. Three songs featured on their "Faster Than Fire" EP for Shadow Kingdom, which also included their live cover of the ANGEL WITCH classic "Sweet Danger". With that EP serving as a teaser for their debut album for Hells Headbangers, "Uncivilized", the time has at last arrived for POUNDER to truly spread their wings of metal.

Any way you cut it, "Uncivilized" is an electric, undeniably timeless cross-section of POUNDER's iron-clad aesthetic, underlining in no uncertain terms just what's so invigorating and life-affirming about the art of heavy metal. From high-octane speed metal cruisers to moody, night-walking stompers to even haunting power-ballads like "Long Time No Love" and "Answer The Call", "Uncivilized" delivers the goods, track after track, in a tight, press-repeat 42 minutes. And it's wrapped in a production job that's on the right side of clean 'n' clear, wholly allowing the grit to glisten and the flash to fly.

Additionally, POUNDER has revealed at its Bandcamp an exclusive new track titled "Desert Rain", which serves as a tribute to the recently deceased Carlos Donegean. Harvey had this to say about the track: "The guys and I only knew Carlos briefly, but it was a privilege getting to make some noise with him. We wanted to give him a proper send-off, and we can only hope he would have dug the song. It's obviously heavy subject matter, and we hope the respect we tried to convey in the tune comes through." The track can be heard below, available to be downloaded for free, as per the wishes of Donegean's family; it can also be purchased, with all proceeds going to the GoFundMe set up for Donegean. 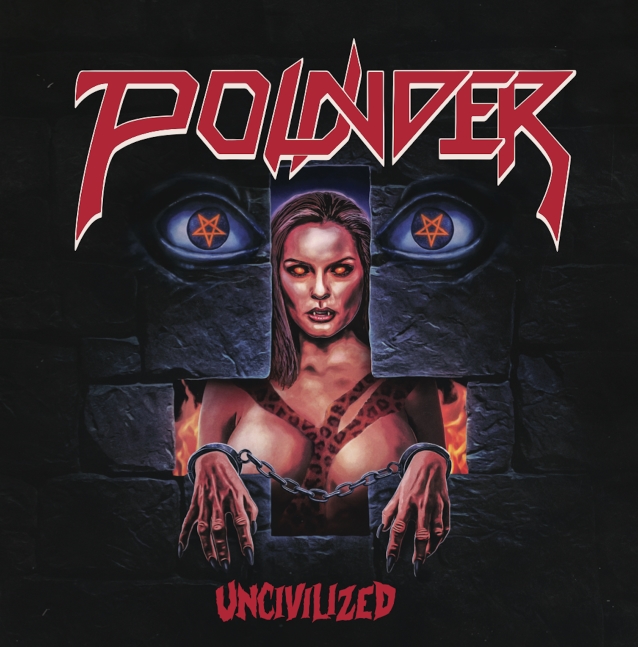