Californian death metal pioneers POSSESSED will team up with long-running Dutch progressive death metallers PESTILENCE for a North American tour in the spring. The "Revelations Of The Ancients" 17-date trek presented by Eternal Rock and Asteri Agency will kick off on March 17 in Houston, Texas and will make stops in Toronto, Brooklyn and Richmond before concluding in Tampa, Florida on April 3. Joining them on the bill is THE BLACK MORIAH.

POSSESSED's Jeff Becerra comments. "Hoping to see you out on our upcoming North American 'Revelations Of The Ancients' tour this March/April where we will be touring with our brothers from PESTILENCE and THE BLACK MORIAH. You really don't want to miss this one as it's gonna be a banger!! See you very soon."

POSSESSED's first full-length album in over three decades, "Revelatons Of Oblivion", was released in May via Nuclear Blast. The disc was recorded at NRG studios and Titan Studios with POSSESSED frontman Jeff Becerra as executive producer and Daniel Gonzalez as co-producer for the album. Mixing and mastering was handled by Peter Tägtgren (HYPOCRISY, PAIN, BLOODBATH) at Abyss Studios in Sweden. For the artwork, the band enlisted Polish artist Zbigniew Bielak (PARADISE LOST, DIMMU BORGIR, DEICIDE, GHOST, GORGUTS) to create a piece that brought back the notion of true fear that was once associated with the idea of evil.

Said Jeff: "Working with Peter was a fantastic experience. We put a great deal of thought into who we wanted to produce our new album. Since we hadn't made an all-new material release in well over 30 years, it was essential that we found the right person. Peter's name kept coming up over and over, and after speaking with my bandmates they all really liked Peter as he is more organic, and somebody we felt would fit in well with our process."

PESTILENCE recently signed a deal with Agonia Records, via the band's imprint Hadeon Records. A new album, titled "Exitivm", will be released in the coming months.

Guitarist/vocalist Patrick Mameli revived PESTILENCE for the first time in 2008, bringing bassist Tony Choy, drummer Peter Wildoer, and later also guitarist Patrick Uterwijk to the table. He began writing music for an early 2009 release for Mascot Records, perversely titled "Resurrection Macabre". Alongside a summer North American tour which followed, these were the band's first activities in fifteen years. Together with Candlelight-era releases "Doctrine" (2011) and "Obsideo" (2013), which both saw further lineup revisions, these "first reunion" albums differed in sound, boldly exploring and pushing the boundaries of death metal's brutality and technicality.

Always a restless soul, Mameli surprisingly put PESTILENCE on permanent hold in 2014, aiming to fully concentrate on his side project, NEUROMORPH, and willing to explore other forms of metal. Fortunately enough, in comparison with the first breakup, this one lasted only two years, and saw the band reunite under Mameli's lead in 2016. The re-established PESTILENCE (pursued a contract with the band's native Hammerheart Records, after several constructive meetings (which also encompassed the re-release of PESTILENCE's early works). At the same time, Eternal Rock Music Agency became the band's booking agent.

PESTILENCE's last album, "Hadeon", was released to acclaim in 2018, taking everyone by surprise with a nod towards the band's early death metal years, yet still nourishing their experimental expression. 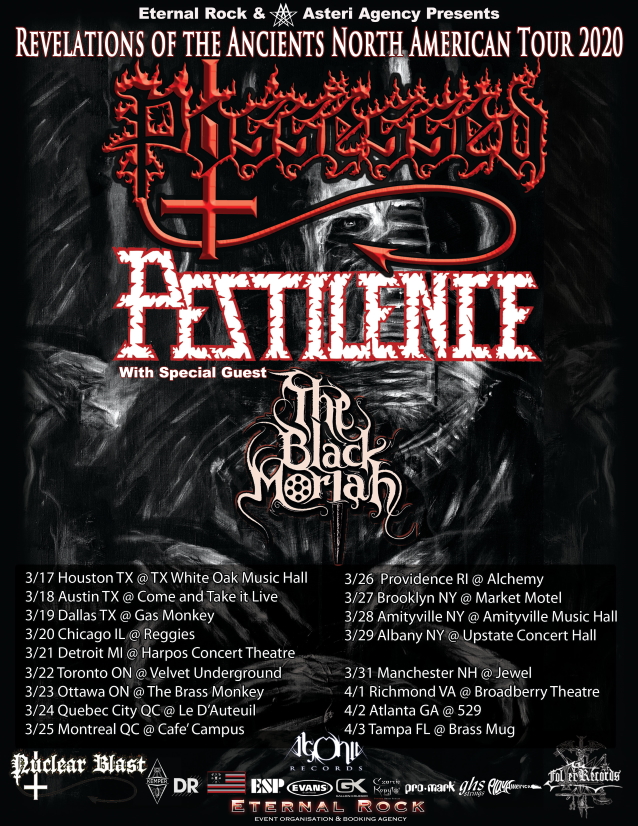