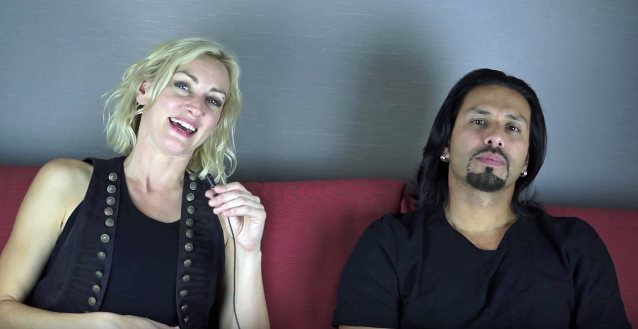 LoudTV.net conducted an interview with POP EVIL singer Leigh Kakaty and drummer Hayley Cramer. You can now watch the chat below.

Asked when fans can expect to see the follow-up to POP EVIL's 2015 album "Up", Leigh said: "It's coming. I think we're gonna try to do it around spring next year. We're in the fourth quarter of this album cycle in the U.S. as well. I think we've got one more big tour [at the] top of the year and then this album [cycle] is over. We're gonna go back and start to get creative again and get ready for that fifth album."

He continued: "I can't believe we're already to five albums; it's crazy. I mean, I just feel like I turned a corner and we just did the first one. So it's crazy to think, and we really do believe that the stage is set for this to be our biggest and baddest — 'bad' in a good way, that is — baddest album yet. And I think Hayley's gonna be a big part of that, and we're excited to see what she brings to the table and excited to see where it goes."

Cramer spoke about the songwriting process for the next POP EVIL record. She said: "There's pieces of a puzzle, and we're collecting those pieces and we're putting them in a box, and then when we get to March, it's when we join the dots and we put the puzzle together. You know, everybody's bringing little pieces, and I see, in soundchecks, bits coming from Nick [Fuelling, guitar] and bits coming from Matt [DiRito, bass]. And we're, like, 'Oh, yeah, let's record that bit.' So we store it, all those little bits and pieces, for when we're ready to focus and knuckle down in March. Yeah, there's some interesting flavors coming out. I'm excited."

Added Kakaty: "Yeah. And I don't even know the flavors. I'm staying away, so there's no lead singer tainting going on. It's just fresh mind, clear head. And from a frontman perspective, there's always a lot on the plate, and I don't want any kind of weird corruption coming in. When it's time to write, I'll write. When it's time to tour, I have to tour."