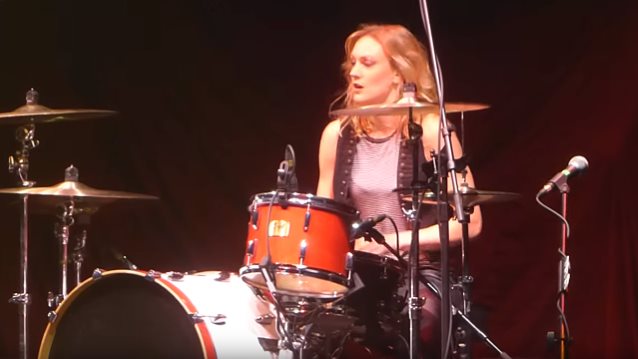 Speaking to RadioContraband, POP EVIL singer Leigh Kakaty stated about the band's latest addition (see video below): "She's amazing. She's from Brighton. We love her. And we didn't think this was gonna work, cause we were, like, 'A girl on the bus? I don't know if this is the right idea.' But we already knew she could play the drums. And if you haven't seen her play the drums, she slays it. But you know what? She's even become a better sister, so I love her."

Regarding how POP EVIL ended up hooking up with Cramer, Kakaty said: "[We got word out] through the grapevine [via] some friends that we were looking for a female drummer, and we didn't know if she existed out there. And word got back around through some talented people that knew her and had seen her play. And [we thought], 'Wow, this could be the girl.' We saw the video. 'Let's see how she plays POP EVIL songs.' And she crushed it on the demo; [she] sent us a great demo. And I'm, like, ' Well, okay, let's see if she can live with us.' So she's been living with us — it's almost two months now — and she's still here; we haven't scared her away. And she's just amazing."

Marunde is said to be taking a new opportunity that will allow him to spend more time with family. He told "The MARR Army Rock Show": "Definitely music will always be a part of my life and I'll always play. I might honestly… I'll probably jam a lot more. A lot of people don't think about that, but we tour so often and we're on the road and playing, we don't really have a lot of time to just go play drums; like, I don't get to just go goof around. I definitely am gonna continue to play, write… I really enjoy working with writing and producing. I don't think I'll become a producer, but I don't wanna say I won't… But that's not my plan.'

He continued: "There may be a time where, down the road especially, once I'm settled and everything is relaxed and the dust has settled, where I make myself available to be a hired gun on very short terms — whether it be for an album or whether that be for three to five days on a tour. That's something I've already talked to POP EVIL about. A year from now, who's to say I won't wanna come out and play three songs on a show, or play a show with the guys — you know, who knows? — whether they are in Michigan or I'm on the road. I'm never gonna stop playing drums."