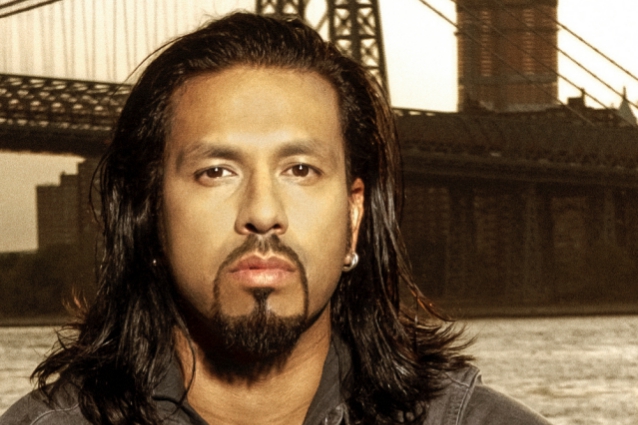 Andy Hall of Des Moines radio station Lazer 103.3 recently conducted an interview with POP EVIL frontman Leigh Kakaty. You can listen to the entire chat via the SoundCloud widget below. A few excerpts follow (transcribed by BLABBERMOUTH.NET).

On POP EVIL being able to take its time when making the 2018 self-titled album:

Leigh: "Super rare, especially for a band of our size. It seems like rock bands who are on the rise these days, it's like a full-time job. You have to stay out on the road 24/7. Doing that, there's tons of problems. You got to be away from your family and friends; the value of your band can go down if you play too much. There's so many things, but if we don't play, we don't get paid and we can't keep the lights on. It definitely was a testament of credit to the longevity of the band and doing things the right way, staying off the road and making the right record. Truly, we felt like this last record was my favorite one to date, so it will be interesting now as we gear up for this next chapter of the band, where it goes, and the writing process will be different this time because we may not be able to take that much time off. Who knows? But we're starting to have those talks now and we'll see how it comes to fruition as the months progress."

On figuring out what POP EVIL should really sound like:

Leigh: "We're starting to really know who we are more off the stage than on. When you know who you are with your identity off the stage, it's a lot easier to bring those elements to the stage and in your music. It just feels like the band is jelling more than we have. Obviously, we've had the lineup the longest. We added Hayley [Cramer], our new drummer, to the project about three or four years ago. Now she's settled in — she's not new anymore. This lineup has been around for a long time and been around the world. So, bringing that energy to the album and writing process has been a big asset for us for the last record. With more shows under our belt, it's going to be even more of a factor moving forward. It was awesome coming together to make that record. It was bittersweet, because this album is probably one of the roughest records of our career. We lost our producer to a motorcycle accident, so it's been kind of a rough album cycle for us. All those hopes and dreams we had with him moving forward were shattered. It's been a bit of a transition and learning experience for us. It's our last record on this label, with this deal we have, so we're renegotiating all sorts of different label deals. There's a lot of different variables on this particular album that had been new for us. But it's all going well, but it's a slow process getting that dialed in, so, again, these different elements I think are going to come out when we write this next record. Hopefully it's just a newfound, reborn energy that we're looking forward to experience in the writing."

On whether Kakaty subscribes to the "never meet your heroes" theory:

Leigh: "No. There's nothing about a rock star that I want. I don't care about it. We're people, man. We're proud of it. We're hard-working, blue collar, we get out there and love to meet people and that's really what it's about. Otherwise, we feel like we'd be trapped in our houses or in our garages, just jamming. Instead, we get to travel the world and meet people. We truly try not to live in our shell and try to get out there and meet somebody new every show and try to spread that message. I think that's the key for rock bands on the rise these days. We always get asked, 'What's the secret? What's the secret?' The secret is just to meet people because definitely word of mouth is still the strongest way to advertise your band and the only way to have people talking about you is to go and meet them. That's definitely something we've learned over the years, and you have to be disciplined enough to do it, because some days are easier than others. Sometimes you wake up and it's a show day and you're beat up and your voice hurts — in my particular instance — and you don't feel like talking, but you got to just fight through and find the strength to understand that I chose this path to be a singer and when you're the singer, you got to always be on, you got to hopefully always be ready to talk to somebody and hopefully inspire them because you don't know where that inspiration is going to come from. It's definitely something we take pride in and try to be responsible to be better every day."