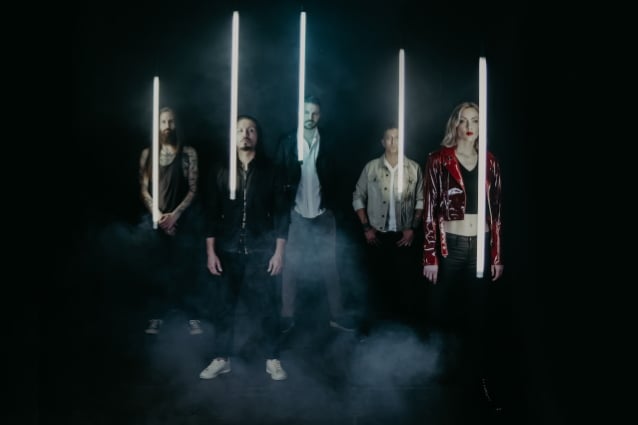 This week, Michigan rockers POP EVIL celebrate their seventh career No. 1 single at rock radio with "Survivor", which topped the Billboard Mainstream Rock chart, marking a historic milestone. "Survivor" joins the previous Top 10 single "Work" and No. 1 single "Breathe Again" from their new album "Versatile", out now via MNRK Heavy.

In other news, POP EVIL has announced a string of headlining dates in the U.S. next month alongside supporting dates with DISTURBED, and a February 2022 Canadian tour supporting SHINEDOWN.

The quartet will headline three shows — on November 3 in Lexington, Ketucky; November 5 in Columbus, Ohio; and November 7 in Grand Rapids, Michigan, alongside supporting DISTURBED in Gary, Indiana; Evansville, Indiana; and concluding November 9 in State College, Pennsylvania.

The 2022 Canadian tour supporting SHINEDOWN kicks off February 10 in Abbotsford, British Columbia and runs east across the country, concluding February 27 in Montreal.

"We won't bore people with the same song over and over," says POP EVIL frontman Leigh Kakaty, who started the band in Grand Rapids. "When you come to our live show, we feel like there should be an ebb and flow, peaks and valleys, that are similar to real life. Sometimes you're up, sometimes you're down. We like to take people on a journey when they listen to our music or come to see us live."

In July, POP EVIL's longtime bassist Matt DiRito announced his exit from the band, saying in a statement that "the details surrounding my departure are only known by a few people, and respectfully it will remain that way."

"Walking away from something I've helped build is not easy — but it is the best thing for the band, myself and our respective futures," he said. "POP EVIL will continue on and so will I, just not together."

POP EVIL drummer Hayley Cramer was forced to miss the first couple of weeks of the band's U.S. tour this past summer because of COVID-19 travel restrictions. She has since flown to the U.S. and joined her bandmates on the road.