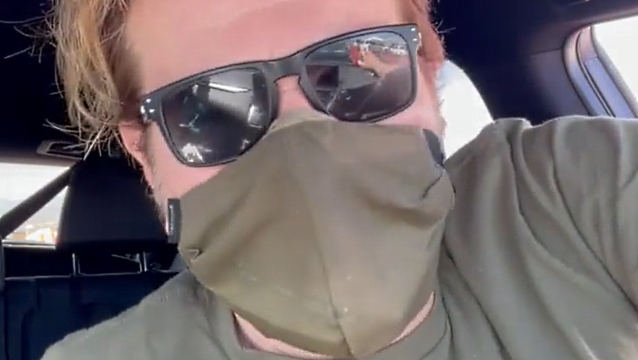 POISON's Rikki Rockett has just received his first dose of the COVID-19 vaccine.

On Thursday (March 18), the 59-year-old drummer, who lives in northern Los Angeles, took to his social media to share a photo of him sitting in his car after he got the shot, and he wrote in an accompanying message: "Today I got my [shot] at a drive through. Pretty cool, pretty easy, just hang the arm and get the stick! ⁠I'm not a zombie yet either".

Rikki, whose real name is Richard Allan Ream, was declared cancer free in 2016 after undergoing an experimental treatment.

In June 2015, Rikki visited his primary care doctor with a sore throat. His doctor found a small tumor at the base of his tongue, and Rikki learned he had human papillomavirus (HPV)-related oral cancer. He endured nine rounds of chemotherapy and 37 sessions of radiation therapy. The tumor initially responded, but returned three months later, spreading to his lymph nodes. Rikki then saw Dr. Ezra Cohen at UCSD Moores Cancer Center, who helped him enroll in a clinical trial of pembrolizumab (Keytruda). Rikki's tumor responded immediately. Just over two months into the trial, a scan revealed that his tumor had shrunk over 90 precent. Today Rikki is cancer-free, enjoys playing with his band, POISON, caring for his two children, and practicing Brazilian Jiu-Jitsu.

A recent poll from the Pew Research Center showed that more than two-thirds of U.S. adults plan on getting the COVID-19 vaccine.

The poll, released earlier in the month, found that 69 percent of adults say they are going to receive the coronavirus vaccine.

Johnson & Johnson's vaccine, which became available in the United States earlier this month after the U.S. Food and Drug Administration gave it emergency use authorization, was tested with new variants of COVID-19, and has shown to be effective against them; Pfizer and Moderna were tested prior to the emergence of these variants.