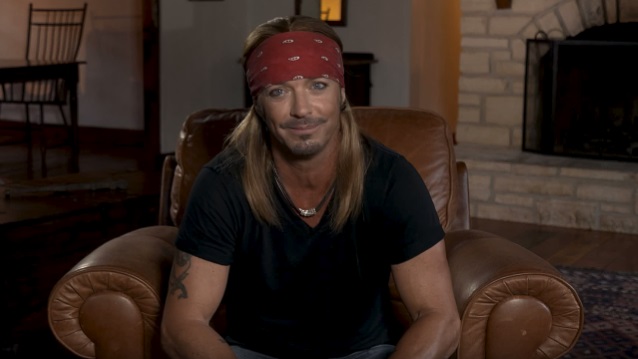 Bret Michaels has told DeSoto Times-Tribune that he is "very thankful" for all the success he has had with POISON, adding that touring this past summer with DEF LEPPARD was "an amazing feeling."

According to Michaels, going on the road as a solo artist is a "therapeutic" experience which gives him "a chance to branch out and do a lot of different stuff, different sounds, different production and stuff. I'm able to change it up a little bit but I still go on that stage and maintain the exact same kind of energy," he said. "I still love that energy and making people feel good at the show. Now, I am able to diversify and do a lot more different things and different versions of even POISON hits."

Bret also talked about the fact that POISON has toured only intermittently in the last few years as he focuses on his solo career,

"There was a period where we had been on the road nonstop," Michaels said. "You have to remember that people think of POISON with its first hit record in '86. That period all the way up to about '96 was a period of about 10 years which was nonstop. We sort of parted with each other until about '99. Then, we've gotten back together ever since. But there was no official [split] with our band. With our band, we were friends who had grown up together. There was no breaking up or getting back together. You just naturally do it. I think if there ever comes a period where naturally we're not going to do that anymore, that's when you say that you'll have a farewell tour, but we never think of it like that. We're kind of like buddies who had seen each other's faces for 10 years during nonstop touring. When we decided to just naturally part ways, I just said that I've got to be on the road making music. It's what I do. I love making music and I will do it as long as I can."

Prior to this summer's run, the band hadn't done any major touring since taking part in the 2012 "Rock Of Ages" trek with DEF LEPPARD and LITA FORD.

Rockett recently said that there has been "talk" about the band writing and recording "at least one" new song.