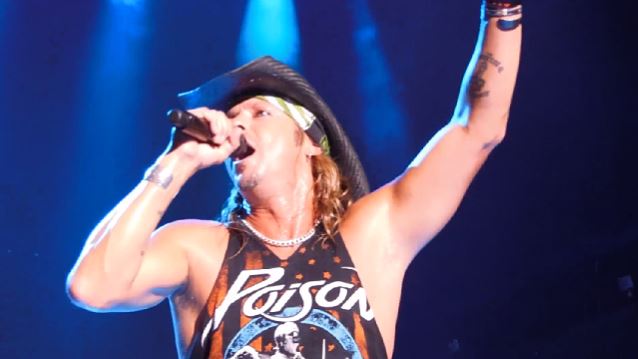 Photos of POISON's first rehearsal for a performance at a private event in Southern California can be seen at BretMichaels.com. A posting on the site reads: "So far no fist fights, sounds great and feels great. Maybe a reunion in 2015…"

POISON drummer Rikki Rockett recently told the "92 Minutes Of Hair With Mel" show on the Las Vegas, Nevada radio station KOMP 92.3 about rumors and speculation about a possible rift within POISON, particularly as it relates to him and singer Bret Michaels: "Actually, there's nothing wrong within the band that I'm aware of — I mean, unless something happened and nobody told me.

Rockett told the "Iron City Rocks" podcast that POISON has been doing "corporate gigs for different companies, which are fun, and they pay very well. It gives us a chance to all get together and play. And, in fact, we have one in October and we have one in January [2015]. But they are the only shows that POISON is doing this year; we are not doing a tour this year. There is a few things that are being thrown around right now by our management for next spring, and we'll just have to see."