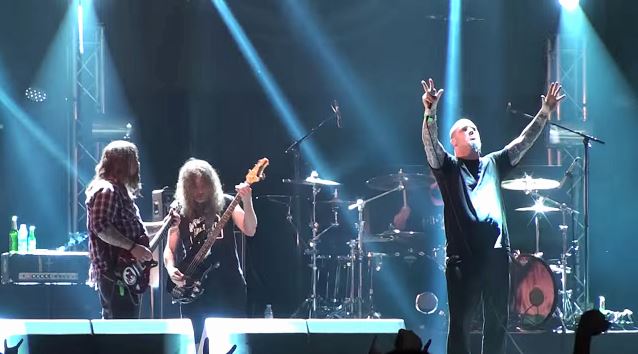 Former PANTERA and current DOWN frontman Philip Anselmo's SUPERJOINT RITUAL project — now known simply as SUPERJOINT for legal reasons — played its first-ever European show at this year's Hellfest on June 21 in Clisson, France. More fan-filmed video footage of the performance can be seen below.

SUPERJOINT will embark on its first tour in over a decade this summer. Presented by Anselmo's own Housecore Records, "The It Takes Guts Tour" will commence on July 10 in Oklahoma City and ravage its way through more than a dozen cities. Support will be provided by punk metal/noise rock misfits CHILD BITE and Australian grind miscreants KING PARROT, both members of the Housecore Records family.

Asked by RollingStone.com about his decision to take another stab at SUPERJOINT RITUAL after saying for years that he would never play with the band again, Anselmo said: "When we were putting together the Housecore Horror And Film Fest Part II, my co-founder Corey Mitchell — may he rest in peace — he was very much an antagonist to get SUPERJOINT as this special one-off and then we'd get back together and reunite and freak people out," he said. "For months and months and months my answer was, 'Hell, no. No way, no way, no way.' And then as we neared the festival I said, 'Well, lemme ask [guitarist] Jimmy Bower.' And Jim was very positive about it. So I said, 'OK, I'll get in touch with [guitarist] Kevin Bond,' and Kevin was all for it. So I said, 'Alright, goddammit. I see where this is going.' So we got into the practice room with a new drummer and bassist and it was a blast. We did the Housecore show and that was fun as well. We were having a good time doing this with clearer brains and more ability to focus. So we figured, 'OK, why the fuck don't we do a tour?' But it did take a while for me to get to the point where I could admit I was having fun."

Regarding whether there is a new SUPERJOINT record on the horizon, Anselmo said: "We've got about four or five songs we've been messing with. They have potential — I just don't think they're completely nailed down yet. So I can't say we'll do a record right off the bat, but there is a damn good chance something new will come out in some form or another, whether it's a split seven-inch, a complete SUPERJOINT seven-inch — maybe a 10-inch EP. Something like that is very possible, but I can't say when."