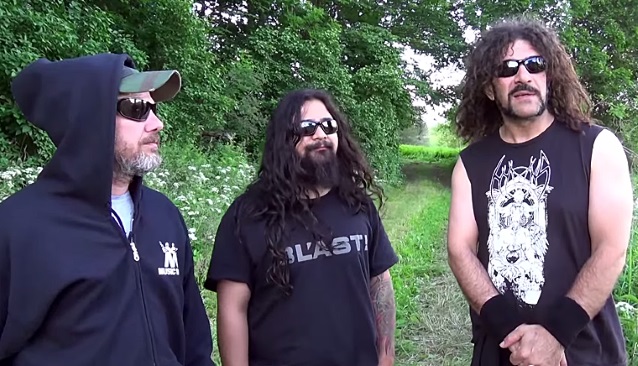 Members of PHILIP H. ANSELMO & THE ILLEGALS — the band led by former PANTERA and current DOWN frontman Philip Anselmo — have weighed in on the persistent talk of a hypothetical PANTERA reunion featuring Zakk Wylde (BLACK LABEL SOCIETY, OZZY OSBOURNE) filling in for the late "Dimebag" Darrell Abbott on guitar.

Anselmo and ex-PANTERA bassist Rex Brown joined BLACK LABEL SOCIETY on stage in Texas in May to perform a cover of the PANTERA classic "I'm Broken", fueling speculation that they will eventually join forces for a tour that would see the musicians paying tribute to Dimebag.

Speaking to Helilaine.ee at last month's Hard Rock Laager festival in Estonia, THE ILLEGALS guitarist Marzi Montazeri said (see video below): "That [reunion talk] happens to any rock and roll band. It's happened to AEROSMITH and VAN HALEN. Anytime something like that has happened before, eventually, after a certain time has elapsed, people wanna see it, and it's inevitable."

He continued: "It's very sad that Dimebag's not here, because if he were, I am one hundred percent sure that PANTERA would be doing a reunion and everything would be cool and everybody would get along just fine. I know this. I know this. They were best friends, man. It was just a small, little separation, and they would have made up. It was bound to happen. Unfortunately, some psycho had to go do what he did.

"But yeah, [Philip] gets asked [all the time about a PANTERA reunion], but it's part of life."

Asked if they think Rex Brown is equally receptive to the idea of going out and performing PANTERA songs live, THE ILLEGALS drummer José Manuel Gonzales said: "[Rex] jumped on stage with us the other day [to perform PANTERA's 'A New Level'], so I'm sure he's pretty open [to] it. He's a really nice guy; Rex is awesome. I mean, if those guys weren't open to the idea, they wouldn't be playing the songs. There's a mutual respect there, obviously, but whatever's going on personally from both sides, no one knows, no one's gonna even try to guess to know."

He continued: "For us, it was fun to be able to share the stage with Rex and to be able to share the moments with Philip and with the people, because, like Philip has said, these songs aren't his anymore, they're not PANTERA's anymore, they belong to the people. I mean, they're over 20 years old, 25 years old, so the people deserve to hear that. I mean, we're a different generation of metalheads that grew up knowing this belief that PANTERA was the shit, and PANTERA is this huge fucking force in metal. And now it needs to come back and people to realize exactly what PANTERA did and their accomplishments and what they did for metal and show that a couple of regular dudes can come out and kick some fucking ass and take the world by storm. And that's a powerful thing. And people still wanna hear the material that they came up with, and we're honored and lucky to be able to share it with everybody. If that's what people wanna hear alongside our material, we're gonna give 'em whatever they want."

Asked if they think a PANTERA reunion will ever happen, Montazeri said: "My little take on that… The word 'reunion' is just not correct. You can't really reunite a band with a missing bandmember. Maybe a 'tribute.' A reunion is when people get back together. If Eddie Van Halen passed away for some reason, who are you gonna get to replace Eddie Van Halen in VAN HALEN? You don't."

Added Gonzales: "If you're asking if we would want to see it? Like, me personally, I would love to see any incarnation that they wanna try to bring up, as far as, like he said, a tribute. If it was a tribute, I would love to see what you've got — Zakk or whoever, whatever guitar virtuoso. Obviously, like we said about a whole generation of musicians being inspired, there's tons and tons of kids all over the Internet that can shred and play these notes crazy accurate, but they might not be playing in bands and stuff like that. Me personally, I would love to see anything come of it, but if not, it is what it is, and you've got THE ILLEGALS at least."

Dimebag's longtime girlfriend Rita Haney in 2011 called on ex-PANTERA drummer Vinnie Paul Abbott and Anselmo to settle their differences in honor of Dimebag, who was shot and killed by a crazed gunman while performing with DAMAGEPLAN at a Columbus, Ohio rock club in December 2004.