According to Stuff.co.nz, former PANTERA singer Philip Anselmo's concerts in New Zealand have been canceled in the wake of last week's terror attacks at Christchurch mosques which left 50 dead.

Anselmo was due to play with his solo project, PHILIP H. ANSELMO & THE ILLEGALS in Christchurch on March 26 and in Auckland on March 27, but those shows have now been called off, apparently in part because of an incident more than three years ago when Anselmo gave the right-arm salute and yelled a white-supremacist slogan at a California concert.

The Christchurch show was originally scheduled for inner city venue Empire. The gig was then shifted to the Club Tavern, which has now publicly announced the Anselmo concert will not go ahead.

"The Philip Anselmo gig has been cancel (sic)," a Facebook post said. "We do not and will not support white supremacy or racism!"

Auckland's Galatos venue, where Anselmo was scheduled to play next week, also announced that the gig will no longer take place.

"Galatos will NOT be hosting this show in our venue on the above date," the venue said in a statement. "Just today, information has come to hand which has made us uncomfortable about proceeding with this show. Ticket holders pls look to the Promotors web site for further information."

At a January 2016 "Dimebash" event at the Lucky Strike Live in Hollywood in honor of late PANTERA guitarist "Dimebag" Darrell Abbott, Anselmo performed the PANTERA classic "Walk". As he left the stage, he made a Nazi-style salute. The singer appeared to say "white power" as he made the gesture, but later claimed he was joking about drinking white wine backstage and was reacting to the audience members up front who he says were taunting him.

On Monday night, tour promoter Ben Mulchin of Valhalla Touring released a statement on social media addressing his reasons for doing business with Anselmo despite the singer's controversial past.

"When his band offered to tour here, I did have to soul search," Mulchin admitted. "Did his apologies seem earnest? Did he fully comprehend his hateful display? Did he — as a prominent figure in metal — take responsibility on how his actions can embolden and encourage others to hate? I think this last thought is pretty important in the current situation.

"We would never book anyone with 'white power' or 'white power politics', or any other silly political agendas," he added. "No way. We need to make that very very clear — as music is our livelihood.

"Phil Anselmo had an indiscretion a few years back while under the influence of substances that is widely documented; by making a very hurtful remark and idiotic gesture.

"I honestly don't think Phil is racist but regardless he has committed a pretty terrible act in 2016."

Mulchin said organizers were considering donating money to the families of those affected in Christchurch as they look for new venues to allow the shows to go ahead.

"On a personal note, I am not looking forward to travelling to Christchurch nor hosting a loud intense concert but I do believe in music as a healing power," he said.

"We discussed on Saturday donating all profits, and $5 per ticket to the families involved with the tragedies."

In the days following the incident, MACHINE HEAD's Robb Flynn — who played PANTERA songs with Anselmo at "Dimebash" — released an eleven-minute response video in which he denounced Anselmo as a "big bully" and a racist. He concluded by saying that he would never play another PANTERA song again. ANTHRAX's Scott Ian, who is Jewish, released a statement on his official web site saying, "Philip's actions were vile" and invited Anselmo to make a donation to the Simon Wiesenthal Center.

Former PANTERA drummer Vinnie Paul Abbott, who hadn't spoken to Anselmo since the band's split in 2003, was dismissive when asked for a comment on the singer's white-power salute. "I can't speak for him," Vinnie said in a 2016 interview. "He's done a lot of things that tarnish the image of what PANTERA was back then and what it stood for and what it was all about. And it's sad."

In 2017, Anselmo blasted "false journalism in the metal community" for suggesting he was racist because of his actions at "Dimebash".

The Philip Anselmo gig has been cancel !!!!
We are not interested in they whys so please dont ask.
We do not and will not support white supremacy or racism!!!

Posted by The Club Tavern Christchurch on Monday, March 18, 2019

Galatos will NOT be hosting this show in our venue on the above date....

Hey guys, this is a very serious time in our nations history and as human beings. Intolerance and hatred needs to be... 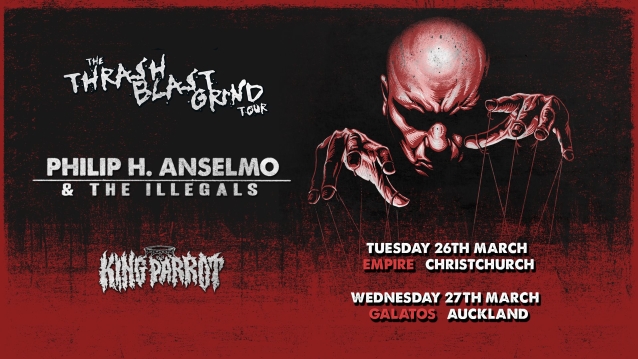