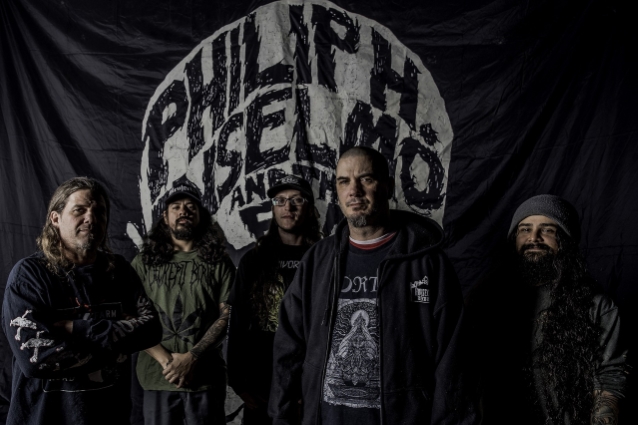 Hellbound's Gene A. Gaona recently conducted an interview with vocalist Philip Anselmo and guitarist Mike DeLeon of PHILIP H. ANSELMO & THE ILLEGALS prior to the band's September 9 concert at Scout Bar in Houston, Texas. You can watch the entire chat below. A few excerpts follow (transcribed by BLABBERMOUTH.NET).

On the writing process for the new ILLEGALS album, "Choosing Mental Illness As A Virtue":

Philip: "I just really dipped back into some old riffs that were inspired by MORBID ANGEL, probably for the most part. Maybe early wave '90s black metal, and then I took a look at modernity and I've been immersed in Australian death metal, namely PORTAL. Those were some big influences going in, but at the end of the story, I don't consider my lyrics necessarily 'death metal' or 'black metal' or any of that shit, so it makes us a little bizarre to categorize. It is extreme, it's fast rock, but, you know, to try and classify us is kind of tough."

On whether "Choosing Mental Illness As A Virtue" is intended to resonate more with each listen:

Philip: "Both of THE ILLEGALS' full-lengths, that's exactly what I wanted to, I guess, have it be distracting and off-putting, I guess, the first time through, but weird enough to where you want to revisit and once you revisit, you start catching the small little nuances here and there. So, it's not easy listening, but what are you going to do about it?"

On how DeLeon came to join THE ILLEGALS:

Philip: "For me, it was a personal thing, meeting Mike: 'Hey, how are you doing?' Really, when I guess I'm talking about guitar for THE ILLEGALS, me listening to Mike play in say, FLESH HOARDER, it's such, to me, just for my ears, it's a different style, so it's tough to gauge how he would be playing THE ILLEGALS until he was in the room. Really, I didn't know until he was right in front of me and he learned, I guess, most of the songs, if not all the songs, by himself and he asked a couple of little questions here and there. But, man, he took it and ran with it and added his own thing. That, right there, to me is big when you start adding your own little things. I love it. I love it, I love it, I love it. I look across the room and see Mike as a badass player. I can't do what he does and he's not a singer, so we got to complement each other, so, fuck, man, the more he brings to the table, it does make my job easier, but not in the way that I think you were trying to articulate. For me, it's a bonus to have a guy add in his own stuff, add in his own bends, add in his own solos, etcetera, etcetera, etcetera, and make it feel like it's a part of him as well. Because all that does is build the relationship for down the line because we will write more music down the line. I know I can trust him with ideas. It's a musical relationship that you just grow together. So far, me and Mike, so good, so excellent. I love it."

"Choosing Mental Illness As A Virtue", was released in January via Anselmo's Housecore Records in the U.S. and Season Of Mist in other parts of the world. The disc is the follow-up to PHILIP H. ANSELMO & THE ILLEGALS' debut, "Walk Through Exits Only", which came out in 2013 to mostly positive reviews.