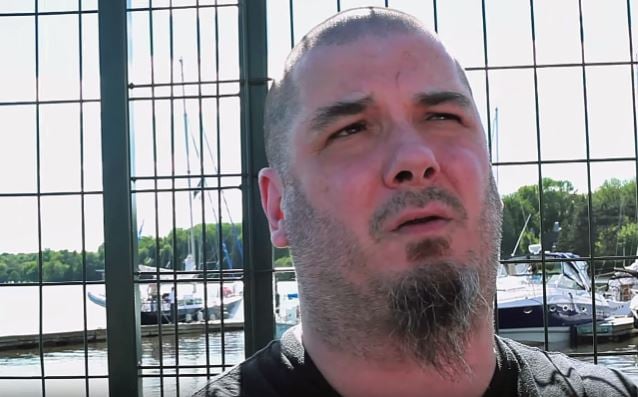 Raw Cut Media conducted an interview with former PANTERA and current DOWN and SUPERJOINT singer Philip Anselmo at the tenth edition of Canada's Amnesia Rockfest, which was held from June 18 to June 21 at the Montebello marina in Quebec. You can now watch the chat below. A couple of excerpts follow (transcribed by BLABBERMOUTH.NET).

On legendary New York hardcore band SICK OF IT ALL:

"Were it not for SICK OF IT ALL, I don't think PANTERA would have been welcomed in New York the way we were. They were the first band to reach out to us when 'Cowboys From Hell' came out. Our first show in New York was with EXODUS and SUICIDAL TENDENCIES, and we were obviously the opening band; nobody knew who the fuck we were. And Lou Koller, the singer for SICK OF IT ALL, started… I saw it… The second we started, he started the pit, and it was on."

On his musical roots:

"I was a metal kid, to tell you the truth. However, I had many punk rock… which I differentiate big time from hardcore. Punk rock, to me, was ugly rock and roll written in song form. There were some deviations — like the PLASMATICS had a ten-minnute song, I do believe; they were punk rock. And then you look at a band like the RAMONES, who are… their chemistry is just ridiculous. And I do liken that to the MISFITS, which, to me, is… I hate to say it's hardcore, though. It's not just punk rock. That's why all these fucking subgenres get made — because people don't know where to slide 'em at. Just call it rock and roll, punk rock… whatever. Keep it simple. Keep it easy."

SUPERJOINT RITUAL — now known simply as SUPERJOINT for legal reasons — recently completed its first tour in over a decade. Presented by Anselmo's own Housecore Records, "The It Takes Guts Tour" commenced on July 10 in Oklahoma City and ravaged its way through more than a dozen cities.