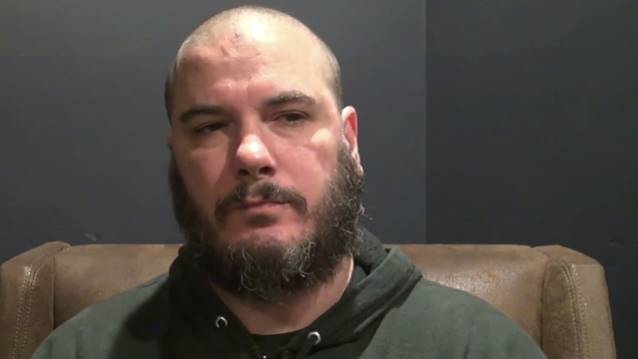 Former PANTERA singer Philip Anselmo insists that he can still "nail" all of the band's post-"Cowboys From Hell" songs and says that his "voice was fried" when he joined BLACK LABEL SOCIETY on stage on May 10 at Best Buy Theater in New York City to perform a cover of the PANTERA classic "I'm Broken".

Writing under the official YouTube account of his record label, Housecore Records, in the comments section below the Rock Scene video footage of the "I'm Broken" performance from New York (see below), Anselmo said: "Dear lovers and haters! I adore you all, and I must admit one thing here and now: my voice WAS FRIED!!! Too many reasons to list here, but I did the DOWN set [Editor's note: Anselmo's current band, DOWN, is the support act on BLACK LABEL SOCIETY's 'Revolver Golden Gods Tour'], waited an hour, drinking and smoking reasonably (hahaha!), and basically, I sucked… I admit it completely — you are correct! Now…. Go back and listen to the last 'Metal Masters 4' or '5' (?) a year ago... When I put my damn mind to it and commit, I can nail all these tunes, to a certain degree. Forget 'Cemetery Gates'-type stuff. But damn near anything post-'Cowboys From Hell' is mine…" He added: "Thanks for the comments, and I wish y'all awesomeness in your lives!"

For a number of high-quality photos of the New York concert courtesy of Mark Weiss, go to this location.

Former PANTERA drummer Vinnie Paul Abbott once again shot down the possibility of a PANTERA reunion with Zakk Wylde (BLACK LABEL SOCIETY, OZZY OSBOURNE) filling in for the late "Dimebag" Darrell Abbott on guitar. Speaking to Revolver magazine's Jon Wiederhorn for a forthcoming story on Paul's current band, HELLYEAH, the drummer had the following to say: "If you had an ex-wife, and it was a pretty bitter split, you might not ever want to talk to her again. Who cares if everybody in the family and your friends want you to say hello again? It's your choice whether you want to do it or not. And I think a lot of people are selfish. They say, 'Oh, he oughtta just kiss and make up with Phil and everything will be cool. And then they can go get Zakk Wylde and everything's gonna be great.' No, everything's not gonna be great."

(Thanks: The Metal Den)