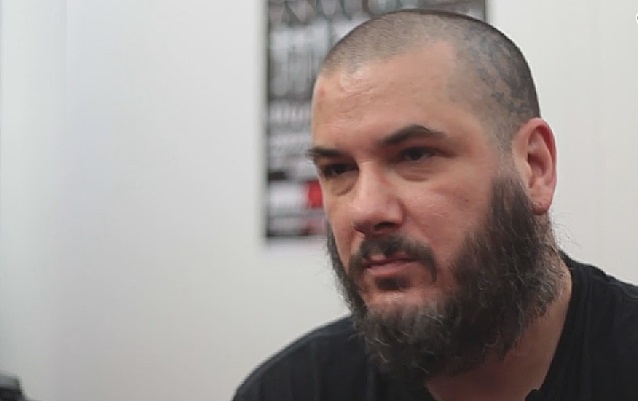 French webmagazine Hard Force's "Metal XS" (web site) conducted a joint interview with vocalist Philip Anselmo (PANTERA, DOWN) and drummer Kjetil-Vidar "Frost" Haraldstad (SATYRICON, 1349) at this year's Hellfest, which was held June 20-22 in Clisson, France. You can now watch the chat — along with separate interviews with members of EXTREME, SKID ROW, SOULFLY and DEEP PURPLE — in the 16-minute report below.

Asked about his recent performances of classic PANTERA songs with his former PANTERA bandmate, bassist Rex Brown, and guitarist Zakk Wylde (BLACK LABEL SOCIETY), Anselmo said: "We're just having fun, man. Especially in a festival atmosphere, it's, like, I can play 15 songs that go right over fucking people's heads, or I can revisit a blast from the past and people can be, like, 'Oh, we know this song.' So, basically, we're just having fun. And it makes the speculation, it makes the pent-up speculation — 'Oh, what's gonna happen?' — but honestly, the more I find out, the more I can inform you fellows."

Former PANTERA drummer Vinnie Paul Abbott recently shot down the possibility of a PANTERA reunion with Wylde filling in for the late "Dimebag" Darrell Abbott on guitar. Speaking to Revolver magazine's Jon Wiederhorn for a story on Paul's current band, HELLYEAH, the drummer had the following to say: "If you had an ex-wife, and it was a pretty bitter split, you might not ever want to talk to her again. Who cares if everybody in the family and your friends want you to say hello again? It's your choice whether you want to do it or not. And I think a lot of people are selfish. They say, 'Oh, he oughtta just kiss and make up with Phil and everything will be cool. And then they can go get Zakk Wylde and everything's gonna be great.' No, everything's not gonna be great."