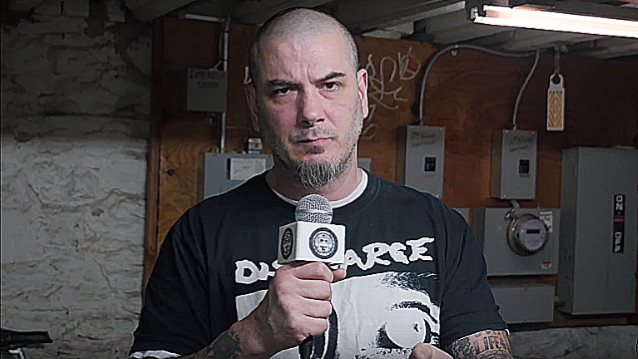 In a brand new interview with Metal Mark of GhostCultMag.com, former PANTERA and current SUPERJOINT/DOWN singer Philip Anselmo spoke about the various projects he is currently involved with. He said: "I've got a brand new [PHILIP H. ANSELMO & THE] ILLEGALS [record] coming out, and it is way different than the first one [2013's 'Walk Through Exits Only']; it's all I'll say. I've got this other project. I don't wanna name it yet. It's kind of clandestine. But it's an expression. And then I'm sitting on the new SCOUR, and I'm sitting on another project that is absolutely extreme but in a way, way different direction. And a lot of the music, I would say a great percentage of the music is stuff that I originally started writing to begin with. So it's, like, the longest music that has grown up with me. And finally over the last, past year and a half or something like that, we just sat down, we got the right players and everybody contributed and next thing you know, it was this two-week-long jam session and I think we came out of it with three albums."

Anselmo also talked about where he gets his inspiration from to continue making new music. He said: "To me, I've always said it: music is historic. I mean, if you look at the past, there you go — it's history. From classical, I'm sure, from two rocks being hit together to the freakin' present. And listening to the old and also keeping an open mind when it comes to the newer music, because I always… I adore what true extreme music fans are really into because of its innovation. And I learned a lot from the younger audience. Some of it I love, some of it I… It's good, it's extreme, but it's really… it's just those handful of bands that really, really hit me in the heart and therefore influence me, inspire me, and it keeps me going, man."

According to Anselmo, there is a more practical reason for why he still feels motivated to write music and tour. "I'm a fan, first and foremost," he said. "I'm always busy, I'm always making music. I don't know how to do anything else. If I could get paid for watching horror flicks, that would be awesome. Or paid for watching and analyzing boxing or the NFL or something like that, which, you know, c'mon… I'm not getting a dime for that. It's, like, you've gotta get out here these days and rock it for the kids."

Anselmo's SCOUR project, in which he is joined by members of CATTLE DECAPITATION and PIG DESTROYER, played a headlining show on June 14 at Saint Vitus Bar in Brooklyn, New York.