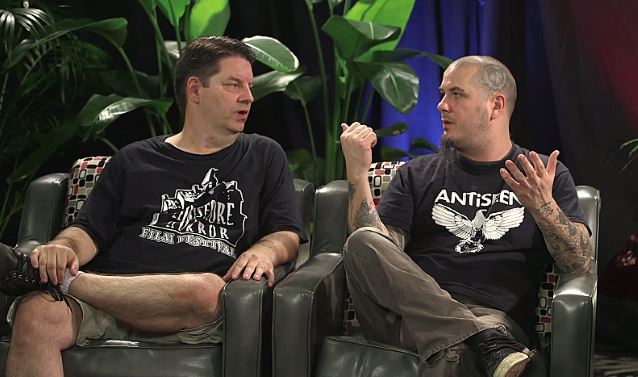 Former PANTERA and current DOWN frontman Philip Anselmo is mourning the death of Corey Mitchell, the true-crime author and Housecore Horror Film Festival co-founder, who suffered a heart attack Monday morning (October 27) and subsequently died mere hours after the second annual event had concluded. He was only 47 years old.

According to The Austin Chronicle, Mitchell was loading up his car with the help of a fan when the fan heard a thud and turned around and saw Corey on his knees. After Corey fell all the way down, the fan got him on his side and he called for help.

"After DANZIG was done, Corey and I got up on stage and thanked all the bands and all the fans, the filmmakers, and the 'Texas Chainsaw' people.

"It's all just horrifically surreal. This one hurts, man. They all do, but this has a special kind of hurt to it.

"The event was such a blast, such a success, and everybody had such a great time.

"Nobody worked as hard as Corey. He believed in it so fucking much. He fought for it every inch of the way.

"It's like lightning striking, man; you just never know."

At the time of his death, Mitchell — an accomplished writer who penned several best-selling books, including "Murdered Innocents", about the Austin Yogurt Shop killings — was working on Anselmo's autobiography "Mouth For War: Pantera And Beyond", due out next year via Simon & Schuster. He is survived by his wife Audra and daughters Emma and Sabrina.