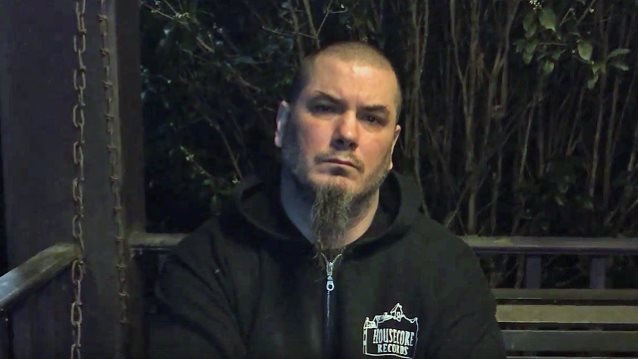 Former PANTERA frontman Philip Anselmo has apologized to his current bandmates in DOWN after the latter group was pulled from the lineup of this year's FortaRock festival in the Netherlands. The FortaRock organizers said in a statement that they were canceling DOWN's appearance at the event because of Anselmo's recent outburst at a concert in Los Angeles where the singer ended the show with a Nazi salute and shouted "white power." They explained that they wanted "to make clear that there is no room for racism or fascism on FortaRock."

Anselmo later claimed he was referring to drinking white wine as part of an "inside joke," but has since released a video message, saying that he "deserves completely" the "heat" that he has been getting over his actions and claiming to be "a thousand percent apologetic to anyone that took offense to what [he] said."

Now Anselmo has posted a further apology on his web site, saying he doesn't want to drag his bandmates down with him.

"To all this will concern,

"Every citizen in this entire world has the unalienable right to live with dignity and respect without hate or oppression. And I mean this, with all of my crushed, yet, guilty heart.

"It's common knowledge that we can choose to either learn from our mistakes, or continue on a path of insensitivity and destruction.

"I am utterly responsible for the mistakes I have made, and can only give you my word to no longer do them in the present, through ACTION, not just mere words.

"My bandmates are now experiencing the consequences of my behavior, and I now publicly apologize to them as well. Never in my entire lifetime would I drag them down with me, and I've privately suggested to them that they move on without me.

"My biggest obstacle(s) are the over-indulging in the booze and blurting out spiteful, ignorant reductions of the human spirit itself. I will address these issues, head-on.

"I'm repulsed by my own actions, and the self-loathing I'm going through right now is justified by the hurt I've caused.

"I realize we live in a society where apologies are NOT accepted easily, yet long for a day when they can be, but I also understand if I'm shunned 'till I hit the dirt.

"From the bottom of my heart, and with all sincerity, I, once again, am truly sorry for the pain I have caused.