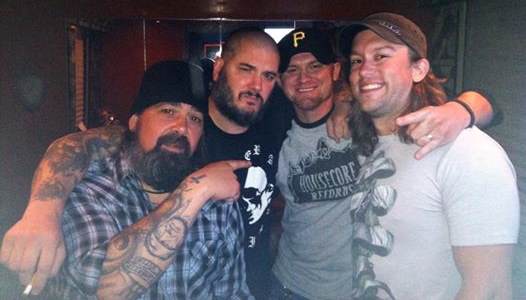 On May 2, Jake Serd of the band DEGRADE THE SIGNAL and Centrill 74 Entertainment conducted an interview with Phillip Anselmo (DOWN, PANTERA) for 94.9 K-Rock in Birmingham, Alabama during DOWN's Revolver Golden Gods Tour with BLACK LABEL SOCIETY, DEVIL YOU KNOW and BUTCHER BABIES. A few excerpts from the chat follow below.

94.9 K-Rock: The new [DOWN] album/EP ["Down IV - Part Two"] will be released May 13th. Anything you guys did differently on this one? Any new formula?

Phillip: Well, obviously, Kirk Windstein [guitar] isn't with us anymore. For DOWN, that's a big deal. However, we totally respect what he had to do and he wants to concentrate on CROWBAR. I love him with all of my heart. [The new DOWN guitarist Bobby Landgraf is] a guy that has worked with us for almost a decade. We've been on the road together and toured together. He's an insanely great guitar player. He fits like a glove. He was always that guy that was there just in case Pepper [Keenan, guitar] or Kirk got ill or couldn't make the gig. He was the fill-in guy. Luckily, that never happened. To have him come in was absolutely a breath of fresh air. He contributed riff-wise right off the bat. I've got to say… This is Pat [Bruders], our bass player's second go at it as far as recording. He did the first EP with us. Pat has stepped it up and brought up these riffs. To have these new riffs made the record. It made the whole experience enjoyable, in my opinion.

94.9 K-Rock: The first single is titled "We Knew Him Well". If you would, talk about that track and the meaning behind it.

Phillip: Well… I'm not going to spoonfeed the listener. With DOWN, I have the option to be very obscure with the lyrics. What I like to do is create lyrics that hopefully create imagery in someones head when they listen to it and read the lyrics. So, as far as any deep meaning goes… fuck yeah, I definitely have my own opinion on what it is and who it's about. I think people should listen to it and come to their own assumptions. Make it fit for their fucking life and go from there. I will let you know that…. the main riff, the first riff is Bobby's. The second riff is Jimmy's [Bower, drums]. And that's all I'm giving ya right there! That's a Bower riff!

94.9 K-Rock: Any upcoming plans after this touring cycle to do any side projects? SUPERJOINT [RITUAL]?

Phillip: No side projects… but I'm definitely working on the new ILLEGALS [Philip's solo band] record. It's a treacherous, hideous, relentless, and fucking extreme. Right now, I'll just say that it's in its skeletal formation. Some bones may be missing in the skeleton, but once I get that skeleton together and start adding each organ one by fucking one, it's going to be an interesting record.

94.9 K-Rock: What made you guys lean more towards an EP release [with the new DOWN]?

Phillip: The question of the fucking decade! Everyone's attention span these days is a little shorter. Honestly, for me, doing a full-length record is a thing of the past. I'm not doing it again. It's boring. If I can concentrate on making five or six songs the best I can, that's the way I would prefer to release it. There's several reasons for DOWN. On the first three records, it took us five years between every record to put them out, so doing it in the EP formula helps us get it quicker to people. Not so much stress on everyone. At the end of the day, DOWN is still made up of a bunch of other bands. The new EYEHATEGOD is coming out and Jimmy is going to be busy with that. Pat does a lot of grindcore stuff. Pepper does all kinds of stuff. I do the ILLEGALS and run the record label and all. We all realize every one of us has other things…. but when it's DOWN time, it's DOWN time. We all commit.

94.9 K-Rock: Recently you released the 20th anniversary [reissue] of [PANTERA's] "Far Beyond Driven". Does it feel like it was that long ago?

Phillip: Honestly, for me, it does feel like it was a long ways away, but then again, some days it feels like it was yesterday. It's a little bit of both. For all of the hoopla over the success of PANTERA, there's no fucking way… and don't get me wrong… [PANTERA] was the tightest band I've ever played with in my entire life. Unbelievable musicians who could do any fucking thing they wanted with their instruments. That's very rare and unique. At the end of the day, I would give all praise and love in my heart to the fans. The PANTERA audience. They are unique… steadfast… brutal… unforgiving… and loyal as loyal gets. Lifers.

94.9 K-Rock: Any communication between you and the other PANTERA guys or was it all through management?

Phillip: We are all attached via e-mail. I don't answer back much unless there's a decision or they need an answer from me on if something is cool or whatever. Rex [Brown, bass] and I keep in touch. I love Rex. I love Vinnie [Paul Abbott, drums]. I love them both. Vince is the captain of his ship right now and he does what he does. I'm not going to judge a man by his life or decisions. I've got my own fucking ship to steer. Rex and I are in contact. I respect Vince and his decisions. Love is the law. Love under will.