Australian thrash grind unit KING PARROT will release its long-awaited new full-length album on May 19 in North America via Housecore Records. Titled "Dead Set", the record was produced by former PANTERA and current DOWN singer Philip H. Anselmo and his recording crew of Michael Thompson and Steve Berrigan at the infamous Nodferatu's Lair (DOWN, EYEHATEGOD, SUPERJOINT RITUAL) in Louisiana and spews forth ten ravaging psalms that showcase KING PARROT's signature punk rock spirit and pummeling sonic debauchery. A true leap forward from KING PARROT's debut, "Dead Set" exhibits a distinct maturity from a band who've committed to the rigors of international touring, slaying audiences through Asia, North America, Europe and Australia on a regular basis.

As the first official helping from "Dead Set", KING PARROT offers up a brand new video for fourth cut, "Like A Rat", featuring a cameo appearance by Anselmo.

Says the band, "KING PARROT are excited to unleash the first taste of our new record, 'Dead Set'.

"We filmed the video for the track 'Like A Rat' on location at Nodferatu's Lair when recording the new album. We wanted to give everyone a teaser track and a small insight into the awesome experience we had recording with the Housecore Records crew.

"We're really grateful that we got the opportunity to record in a studio that's not all fancy bells and whistles, just a real down-to-earth place where we felt comfortable.

"Our aim was to get a unique and organic sounding product that sounds exactly like the band. I think we achieved that working with Phil, Mike and Steve.

"Preorders are now live for the record and we worked up some great bundle packs with our respective labels that we think fans of KING PARROT will dig."

KING PARROT will return to the states this Friday for another run of live abrasions. Beginning March 20 at SXSW in Austin, Texas, KING PARROT will level over two-dozen cities supporting bong metal assassins WEEDEATER, with the passage coming to a close on April 18 in Wilmington, North Carolina. The trek follows the band's recent ten-date march through Europe (also supporting team WEEDEATER). From there, the band will do two headlining shows including a special Housecore Records signing party at the Blue Nile in New Orleans April 20 before heading back to their home turf for a two-week Australian trek with additional live incursions in support of "Dead Set" in the plotting stages. 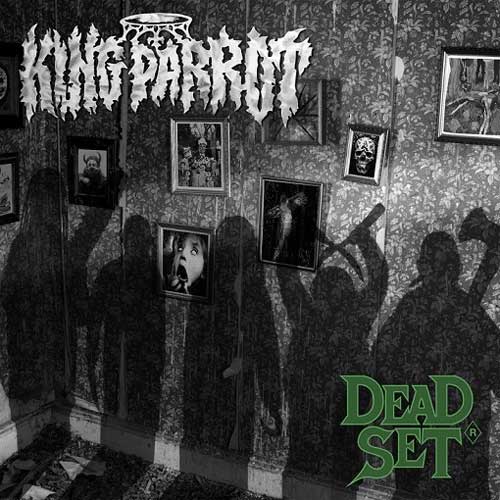