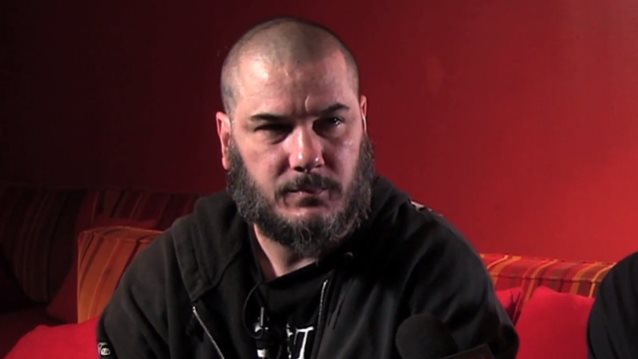 TeamRock Radio conducted an interview with former PANTERA and current DOWN frontman Philip Anselmo at this year's Download festival, which is taking place June 13-15 at Donington Park in Leicestershire, United Kingdom. You can listen to the chat using the SoundCloud player below.

Asked about DOWN's no-nonsense approach to performing at festivals and how it helps the band stand out from any other groups they may be sharing the stage with, Anselmo replied: "I just think that we have our own identity that is… God, I wish I could say it the way Pepper [Keenan, DOWN guitarist] reminds everybody. It's kind of punk, but kind of not.

"We're not big image guys; we like to let the music do the talking for us and really approach the audience as one of them, really. Because I hate rock stars, man. I hate all that untouchable 'lay off me' and entourages and all that shit. It's ridiculous. So I think the fact that we keep it down to earth, and we play songs that we damn well know are crowd favorites, I think that is a recipe for some type of success. I just don't know how to put my finger on what type of success. So that's even better. The unknown is great, too."

In a 2013 interview with Zoiks! Online, Anselmo elaborated on his opinion of "rock stars," saying: "I think the more real you can be with people in general, they don't have to be fans or anything like that, just the more real you can be with people in any walk of life, because, honestly, I can't say I'm any good at much else than what I'm into, and if music is my fucking specialty, it doesn't mean I can walk in someone else's shoes and do their job, because I can't. That's how I look at everything, especially between people relations. It's hard enough living in my own skin; God knows I can't imagine living for someone else at the same time. I think it's a two-way street, man, and both of us have the right of way. I prefer to make friends over having this worship or be set up on this pedestal. It's bullshit, man."