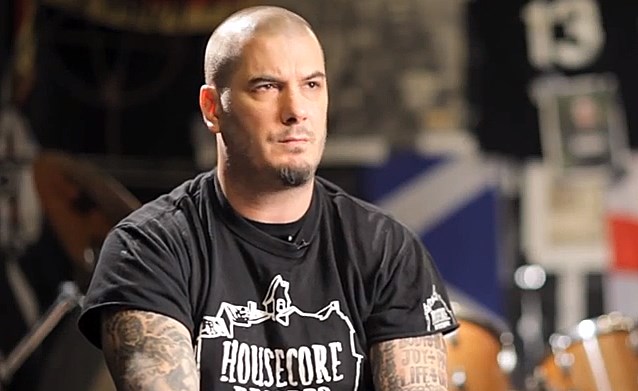 Keith Spera of The Times-Picayune recently conducted an interview with former PANTERA and current DOWN singer Philip Anselmo. A couple of excerpts from the chat follow below.

The Times-Picayune: You've got a book deal to write your autobiography in collaboration with true crime author Corey Mitchell.

Anselmo: It's a book about my life. It's not just strictly a PANTERA book, although PANTERA was obviously a giant part of my life. It took a whole lot in the New Orleans area and throughout Louisiana, gigging and gigging … a whole lot happened, and had to happen, before I was even able to be in the same room with the great musicians that were in PANTERA. Obviously, after the break-up of the band and the death of Dimebag (Darrell Abbott, the former PANTERA guitarist who was shot to death in December 2004), a whole lot has happened. There's a tremendous story to tell there. I'm going to try to pick out the most humorous things, and the most crushing things. Touch on all of them.

The Times-Picayune: So you'll talk about all your back problems and …

Anselmo: Absolutely. And drugs, and everything. Hopefully it's educational for people that are going through the same thing. I'm also going to discuss how doctors are only doing half their jobs these days. They don't explain to the patient the repercussions of certain medicines that they dole out so portentously. I'm going to slam some doctors, but I'm going to be brutally honest about myself. There's an upside to everything. It's 2013. I'm 10 years clean from anything that resembles hard drugs. I haven't even tasted a sip of whiskey since 2001. Things change in a life. So there's plenty to tell.

The Times-Picayune: Your longtime girlfriend, Kate, kind of helped save your life.

Anselmo: She did. And she will get tons of credit in my book. We've been together 11 years now. Without her strength, it wouldn't have gone the way it did. Her steadiness, her rock-solid belief in me helped me pull through and do things correctly. She's gold, or platinum, or titanium, or tungsten. I'm more in love with her now than I ever have been.

The Times-Picayune: Why, at this stage in your life, did you make a record that was so extreme? Most people, when they get a little older, tend to become more mellow.

Anselmo: In DOWN, we've got everything from heavy metal songs to smooth rock songs to straight-up acoustic pieces. So right there, that covers a whole lot of ground. I keep up with the extreme heavy metal underground because I adore it. It's part of me. The extreme underground is the lifeblood of heavy metal and the future of heavy metal. There are a lot of cornerstone bands out there right now that are changing the game up, and they're really writing some awesome, innovative stuff. With extreme music, the leading genres would be black metal and death metal. But I didn't want to really belong to either one of those genres, because I think I've touched on both genres in the past with several of my side projects. I wanted to make an extreme record that was absolutely non-traditional. There is no wrong way to do music. Music is a vast, wide-open world of possibilities. I'm an explorer, and I'm going to keep on exploring.

Read the entire interview at The Times-Picayune.