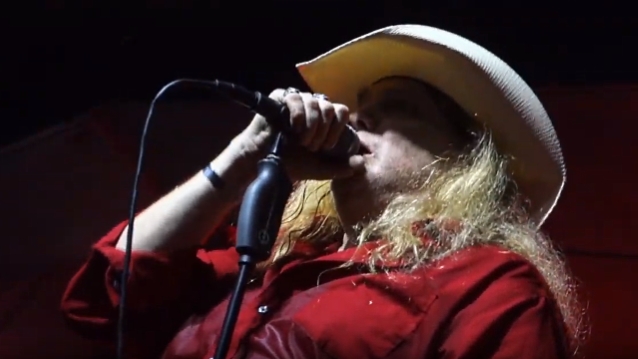 The family of Phil McCormack, the frontman for rock band MOLLY HATCHET, has called him "a multi-layered person" who "left us too soon."

Phil died Friday night (April 26), according to close friends and bandmates. No cause of death has been revealed. He was 58 years old.

"The McCormack family wishes to share the news of Phil's death with the MOLLY HATCHET family.

"Phil has been a member of MOLLY HATCHET for more than 20 years, having performed in exotic locations such as Dubai, Munich, Sturgis, Okinawa, as well as smaller stages. Wherever he performed he gave his all.

"Phil loved his audiences and they loved him. MOLLY HATCHET fans know how much time Phil spent with them before and after each show. He loved meeting people and sharing time with them.

"Being on stage was where Phil felt at home. He connected with his audiences, fully tuned into the moment he was sharing with them. He was living his dream, a dream he never took for granted.

"Phil was amazed at how many loyal fans he saw year after year. That meant a lot to him. You meant a lot to him. Beyond the stage, he was a multi-layered person — free spirit, high-octane social presence, nonstop jokester, kind person who made time for others, self-destructive tendencies but a generous spirit… he was an open book. What you see is what you get.

"He left us too soon, but his legacy lives on in his music, his friends, his fans and the friends he didn't get the chance to meet.

"As Phil's siblings, we have loved the journey we've shared as a family. Seeing Phil live his dream has been a blessing for us. We already feel the loss and will miss him every day.

"We also thank the MOLLY HATCHET family — the bandmembers, the crew and especially the fans — for being such a big part of his life. You brought so much joy to Phil. Words cannot express our appreciation.

"Life goes on. Phil's legacy goes on as well through his music, his loved ones, the moments he shared and thee friends that he made."

McCormack officially joined the band in 1996 but stood in for the late and former MOLLY HATCHET frontman Danny Joe Brown many years prior.

Formed in 1975 in Jacksonville, Florida, MOLLY HATCHET has released a dozen studio albums — 2010's "Justice" being the latest — plus several other live and greatest-hits compilations.

Known for hits "Flirtin' With Disaster", "Whiskey Man" and "Gator Country", the band has undergone numerous changes in its nearly four-and-a-half-decade history, including a brief split in the early 1990s. In recent years, fans have mourned the loss of several former bandmembers, including frontman Danny Joe Brown, who died in 2005; original guitarist Duane Roland in 2006; original drummer Bruce Crump in 2015; bassist Banner Thomas in April 2017, original guitarist Dave Hlubek in 2017; and frontman Jimmy Farrar in October 2018.

MOLLY HATCHET released its debut album on Epic Records in 1978, shooting to the top of the charts. "Flirtin' With Disaster" followed, and the title track became a legendary hit for the band.

The McCormack family wishes to share the news of Phil’s death with the Molly Hatchet...