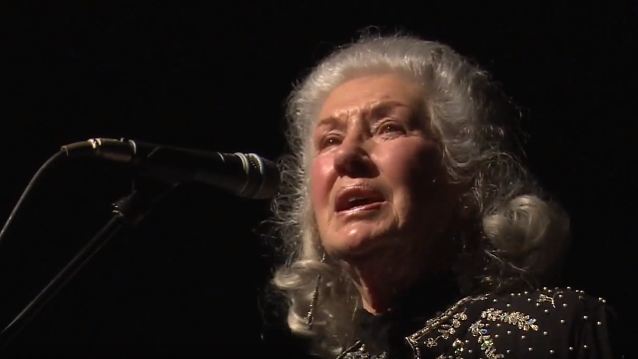 Philomena Lynott, mother of the late THIN LIZZY frontman Phil Lynott, has died at the age of 88. She was battling cancer in recent years.

Philomena's death was confirmed by Hot Press magazine, which worked with her on the book "My Boy" about Phil's life. The book, which was written with Jackie Hayden, was a two-time No. 1 best seller and told her extraordinary life story.

"She was a formidable and brilliant woman," Hot Press editor Niall Stokes said. "I am really proud that we were able to participate in telling her remarkable story. Because she was indeed a remarkable woman."

He added: "She was hugely determined and courageous — and absolutely committed to the campaign to ensure that Philip's memory was kept alive and his legacy celebrated."

THIN LIZZY guitarist Scott Gorham stated: "It is with great sadness that we have learned today that Philip's mum, Philomena Lynott, has passed away. She was always a great supporter of THIN LIZZY from the early days, throughout the band's existence and beyond. She always did her best to keep Phil's flame alive over the years, opening up her home to thousands of fans from around the world who paid her a visit. RIP Phyllis — we'll miss you."

She said: "I am really upset at Philip's music being used in a political way that he himself would not have approved of. As far as I'm concerned, Mitt Romney's opposition to gay marriage and to civil unions for gays makes him anti-gay, which is not something that Philip would have supported. He had some wonderful gay friends, as indeed I do. They all deserve equal treatment in every respect, whether it be in Ireland or in the United States. Neither would Philip have supported his policy of taxing the poor and offering tax cuts to the rich, which Paul Ryan is advocating. There is certainly no way that I would want the Lynott name to be associated with any of these ideas."

She also actively campaigned against drug abuse and urged people not to follow the same tragic path as her late son. Phil died in 1986 at the age of 36 after years of drug abuse.